0%
Tweet
The Apple Watch is the focus on media attention this week, but Microsoft's Band update looks to challenge the device.

Microsoft has upgraded its open Health platform and wearable fitness gadget Band as much of the attention today is focused on the Apple Watch and whether its release will start a new phase in the wearable and smartwatch markets.

The Microsoft Health platform is designed to combine data from a range of devices already deployed with health and fitness apps -- the company's update allows users to track daily steps and calorie burn inside of the app using the sensors contained in a wide variety of Android Phones, Apple's iPhone, and Windows Phones.

The update builds on Microsoft's Bike Tile, which was introduced in February, and expands cycling functionality through partnerships with Bike apps like MapMyRide and Strava.

As of this month Band customers will be able to wear their device during rides and to compare performance or share routes with other riders using these apps. 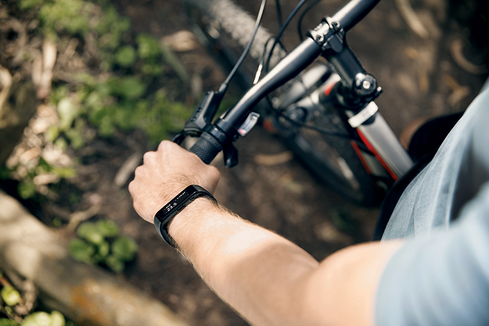 The Health app update means users will be able to access new insights and observations in the company's Web-based dashboard, such as comparative insights, which measure data such as daily steps, sleep, workout frequency, and calorie burn and compare the information to similar Health users based on body type, a combination of height and weight.

Microsoft noted that step-tracking capabilities are only supported through apps on the iPhone 5s and later, Android 4.4+ with support for Step Counter API, and Windows Phone Lumia devices with Sensor Core V1+ and Cyan FW.

Users can also deploy the Web dashboard to analyze sleep restoration, sleep efficiency, and wake-ups to find out how well the body restores its resources during sleep.

Microsoft also included Fitness Benefit, which measures progress using historical data to measure improvement over time, and VO2 Max, which refers to the maximum volume of oxygen used during exercise -- an indicator of cardiovascular fitness.

Additionally, the Run/Exercise Observations feature helps users maximize runs and workouts with analytics insights that, with a week of data, let them determine which day of the week and at what time of day they perform best.

Using historical data from as far back as five weeks, users can track whether they're maintaining, progressing, or need to redouble their efforts.

Users can also analyze their personal stats to find specific aspects of runs and workouts that can be improved.

[Read about the launch of the Apple Watch.]

"We encourage our customers to continue to provide feedback and responses to Microsoft Health and Microsoft Band and look forward to delivering even more to help our customers and partners live healthier and be more productive," Matt Barlow, general manager of new devices marketing at Microsoft, wrote on the company's blog.

The wearable fitness device market is under new scrutiny thanks to Apple's launch of its smartwatch, which promises to improve the market while adding personalized features.

In addition to the standard features fitness bands offer, Apple is doubling down with the HealthKit platform, designed to help doctors, other medical professionals, and scientists gather data more frequently and more accurately from participants using iPhone apps. The software enables researchers to contribute to specific activity modules in the framework, like memory-testing or gait-testing.

Nathan Eddy is a freelance writer for InformationWeek. He has written for Popular Mechanics, Sales & Marketing Management Magazine, FierceMarkets, and CRN, among others. In 2012 he made his first documentary film, The Absent Column. He currently lives in Berlin. View Full Bio
We welcome your comments on this topic on our social media channels, or [contact us directly] with questions about the site.
Comment  |
Email This  |
Print  |
RSS
More Insights
Webcasts
Building a Strategy for Detection and Response
5 Steps to Integrate SAST into the DevSecOps Pipeline
More Webcasts
White Papers
Calculating the Cost Savings of Simulation-Based Cybersecurity Training
Use Case Coverage for Simulation Based Training
More White Papers
Reports
Assessing Cybersecurity Risk in Today's Enterprise
2019 Threat Hunting Report
More Reports

In my opinion, the Microsoft Band is more in competition with Fitbit as a fitness/smartwatch, than with the Apple Watch, which lacks the GPS needed for serious fitness tracking. Although the three bands have their unique strengths, Microsoft and Fitbit are more like each other than like Apple.  Craig Herberg
Reply  |  Post Message  |  Messages List  |  Start a Board

I have yet to see mention of the MS Band's phone, email, facbook, IM, stocks, search, calendar, UV, weather, and more features. The days of pulling your phone out of your pocket every time it beeps/rings/chimes/vibrates are over. A quick glance at the band is typically all you need.
Reply  |  Post Message  |  Messages List  |  Start a Board

I think that the Microsoft band has many excellent items what will attract a more broader set of individuals than the Iwatch.  Also, since it comes with their health dashboard, think about seniors at retirement homes or people who need to keep track of their health due to a chronic condition they will be able to track their health in much improve ways.
Reply  |  Post Message  |  Messages List  |  Start a Board

Thanks to Apple's unclaimed "pusle oximeter" I have found more interest in this offering from Microsoft and surely they will deliver.
Reply  |  Post Message  |  Messages List  |  Start a Board

@PedroGonzales: I think there are many features which are available in both MS and apple products. The difference is that MS hasn't called it as a replacement of conventional watch due to which it is not getting much critical reviews secondly it also costs lesser than apple.
Reply  |  Post Message  |  Messages List  |  Start a Board

I think Microsoft is playing safe by using its power already established health framework (since Google health is out), I think they really have a change to make a huge impact with HealthVault.  Off course, it is no Iwatch.  I believe healthvault is the only portal that has partnerships with a lot of health network and provide a huge connectivyt with health monitoring devices
Reply  |  Post Message  |  Messages List  |  Start a Board

@PedroGonzales: I agree with you, I think there is a little but a huge difference in both apple and MS sale strategy. Apple is selling an expensive product with is a watch along with health monitoring features whereas MS is selling a cheaper health monitoring feature which has a watch as well. Now it's up to the user what they are more attracted to but on paper MS looks like a better option at the moment.
Reply  |  Post Message  |  Messages List  |  Start a Board

The good thing of consumers now is the variety of choices.  Apple can't say that they are bring the best choice because so many players are launching their own type of solution.   I think the market will be fragmented with device and niche market that Apple couldn't meet the demands of everyone, but with apple entry other providers are offering their own types of smartwatches.
Reply  |  Post Message  |  Messages List  |  Start a Board

I think at this stage apple doesn't have the advantage of their flagship OS which they used to have in their other product. Apple has a large customer base because the users are comfortable with their OS interface. In such a small screen of smartwatch, the OS hardly matters at the moment.
Reply  |  Post Message  |  Messages List  |  Start a Board
Editors' Choice
Hot Topics