The IoT controller has gained battery backup and the ability to handle streaming video.

SmartThings, a maker of Internet of Things (IoT) devices acquired by Samsung last year, has introduced the second version of its Hub control unit.

Promised for Q2 delivery at CES in January, the second generation Hub acts as a router and control point for a wide variety of network-ready hardware, such as motion sensors, video cameras, thermostats, light switches, and other appliances.

The revised Hub now has battery backup (4 AA batteries), a feature that makes setting up a DIY home alarm system more feasible. An alarm system that cannot function in the absence of power presents a significant vulnerability.

Though having an Internet connection that also has backup power represents the optimal situation, the Hub has been revised to handle more app processing locally, to make connected devices less reliant on a connection to the cloud. According to SmartThings, some automations controlled by ZigBee and Z-Wave devices no longer require an Internet connection. 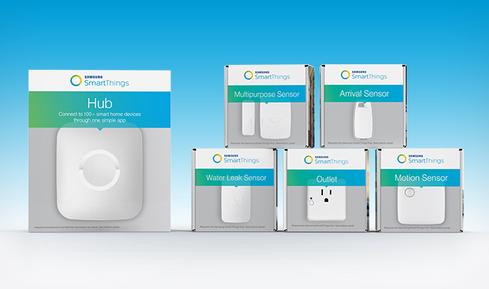 Available for a suggested price of $99, the Hub relies on a 1GHz ARM Cortex-A9 processor with 512MB DDR3 RAM, and 4GB flash memory. The device requires a wired Ethernet connection. It includes 2 USB ports (inactive, for future use), supports ZigBee and Z-Wave protocols, and is capable of supporting Bluetooth, if and when SmartThings choses to activate the technology.