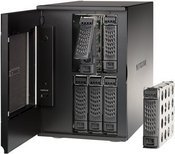 Unmanaged switches are traditionally found and used in small businesses, branch offices, retail shops, and restaurants, as well as in conference rooms, lobby, and lab areas, and some home offices, according to Wu. However, these LANs are now connecting not just desktop and laptop computers, but also wireless access points printers, servers, storage devices, voice over IP (VoIP) phones, IP cameras, and other gear, said Wu, "and these have more diverse and sophisticated network requirements than traditional unmanaged switches can provide. We feel that switches for these locations need more intelligence and reliability."

Also, noted Wu, "Our survey shows that customers are capable of setting up the features on these switches, it's as easy or easier than setting up a home wireless access point."

"This is an inevitable evolution of the market, since the main difference between a managed and unmanaged switch is software plus maybe a few dollars more hardware," stated Craig Mathias, Principal at Farpoint Group, a technology advisory firm. "There's a lot of value for small businesses, where the networks are being asked to do more. It only takes using one feature once to pay for itself."

The QoS prioritization in the ProSafe Plus switches lets a company prioritize traffic by port or by type of data, so -- for example -- streaming video can be prevented from interfering with crucial business tasks.

The cable test feature lets the company detect cable loops without needing to eliminate separate network diagnostic tools that often cost hundreds of dollars. Cable loops, if not detected and fixed, can cause broadcast storm that interfere with network performance.

VLAN support lets the company separate traffic into virtual network segments, such as for a guest Wi-Fi network "walled off" from the rest of the company network.

The ProSafe Plus switches also provide automatic protection against denial-of-service (DoS) attacks, as well as traffic monitoring and control.

The new switches are fanless, operating quietly enough that they can be placed in open work areas, and have power-saving features that can reduce power consumption by up to 70% compared to unmanaged switches.