The latest version of the Mac OS X, called El Capitan, looks a lot like the last version with some visual and functionality improvements. However, it's the added security that makes the upgrade worth it.

The latest iteration of the Mac OS X operating system -- 10.11 -- was officially released Sept. 30 on Apple's App Store. The company appropriately named it El Capitan during its development, which is a mountain located in Yosemite -- the development name of the preceding version of OS X.

El Capitan looks much like Yosemite on first glance, presenting a similar screen appearance. The changes that have occurred are mostly under the hood of the operating system. As an example, multiple security problems have been squashed in this OS.

There are differences between Yosemite and El Capitan, however.

The most obvious of the visible change is the split-view feature that allows two open applications to share the desktop in a side-by-side manner, instead of one active app having to lie on top of another inactive app.

To activate the split view, two apps first open directly or from the Mission Control program launcher. Click and hold the rightmost of the three buttons that show up at the top left of one application's windows. The clicked application will resize and take up one half of the screen. Select another desktop-visible application by clicking on it. Doing so puts it in the other pane in a shrunken view, which expands when you click it. When either application is clicked on, it becomes active. The windows may be switched from one side of the screen to the other. 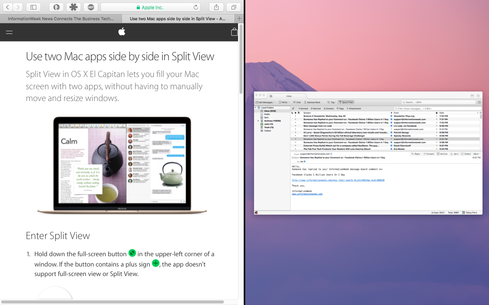 To return to a desktop view (while keeping the split view active) is just a matter of swiping four fingers to the right. Repeating the gesture to the left brings the split view back.

Clicking the top right button again on one of the apps cancels the split view, and returns the app to the desktop in the usual view. The click is repeated for the second app to bring it back to the active desktop.

Apple's apps have been refined as well. Usability improvements have been made to Photos, a new Notes app, Maps, Spotlight (which now allows searches to be performed with nearly natural language queries), the Safari Web browser, Mail, and Mission Control. 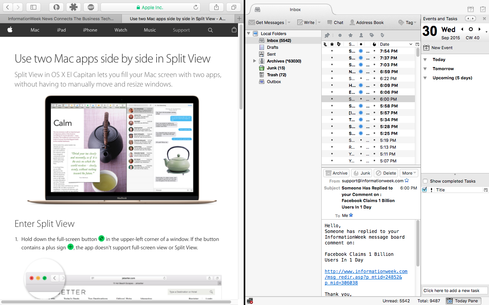 But one of the most important improvements is not visible at all. Apple has changed the basic OS security design in a major way.

[Read about the best apps for Mac OS X.]

Rather than follow usual Unix security methods, Apple's engineers have removed the privileged "root." This root user is given special privileges for system manipulation in most systems, and getting access to this level is the goal of most malware. From there the malware can change the files the system executes.

The "System Integrity Protection" is designed to limit the damage that an attack can do by limiting what the root itself can do. SIP cannot be disabled from within the operating system, only from the backup OS X Recovery partition. This means that programs running under the OS cannot alter how the OS is configured while it is in use.

There is also an improved graphics engine called Metal that will show up in improved gaming apps.

In short, El Capitan is an incremental polish of a smooth system that adds usability and stability to the evolution of the Mac OS. The added layer of security, however, provides the most peace of mind for Apple users.

Larry Loeb has written for many of the last century's major "dead tree" computer magazines, having been, among other things, a consulting editor for BYTE magazine and senior editor for the launch of WebWeek. He has written a book on the Secure Electronic Transaction Internet ... View Full Bio
We welcome your comments on this topic on our social media channels, or [contact us directly] with questions about the site.
Comment  |
Email This  |
Print  |
RSS
More Insights
Webcasts
Making Cybersecurity Work in Small and Medium-Sized Businesses
ROI and Beyond for the Cloud
More Webcasts
White Papers
How to Prioritize Risk Across the Cyberattack Surface
Seven recommendations for a Successful SD-WAN Strategy
More White Papers
Reports
How Data Breaches Affect the Enterprise (2020)
2020 Threat Hunting Report
More Reports

Yeah, but problems come when that install wipes projects under construction.

@danielcawrey, yes, it a good idea slipstream update does make sense for most of the hardware connected to internet :)
Reply  |  Post Message  |  Messages List  |  Start a Board

@larryloeb, from IT tech point of view - fresh install is always better... I think the same way...
Reply  |  Post Message  |  Messages List  |  Start a Board

Personally, I like the "wipe the old one out and write the new one" approach.

Opportunistic updates are done for security updates and the like; but the current upgrade methods keeps current data intact and replaces only the affected functional resources.
Reply  |  Post Message  |  Messages List  |  Start a Board

I like how Apple is continuously iterating its OS, and offering it for free to Mac users.

The only issue I have is that these updates will over time cause machines to get bogged down. Also, the upgrades would be better if there were a way to slipstream them in the same way that Chrome OS does them.
Reply  |  Post Message  |  Messages List  |  Start a Board
Editors' Choice
Hot Topics