Microsoft shared a roadmap of upcoming Windows 10 features for business PCs and delivered its first CBB build since the operating system launched in July 2015.

Microsoft has published a roadmap to keep Windows 10 enterprise users updated on which features were recently released, in public preview, still being developed and tested, or no longer in the works.

For a company that has traditionally kept its operations under wraps, Microsoft is trying to be more transparent in developing Windows 10. This roadmap, which is divided into two sections for home and business users, is the latest effort to shed light on what's coming.

Some of the features categorized as "in public preview" were recently announced at Microsoft's Build 2016 conference as part of the Windows 10 anniversary update, which will arrive on PCs later this summer. Insiders in the Fast ring are testing a few as part of preview build 14316, which launched April 10.

[More from Microsoft: Xamarin is integrated into Visual Studio.]

These aren't new to Microsoft watchers, but it's interesting to read up on features listed as "in development" on the roadmap:

Other features listed as "in development" include improved inking capabilities in Windows Ink, Windows Defender Advanced Threat Protection, picture-in-picture for viewing videos while working on other tasks, and the ability to use a Microsoft Band 2 or other companion devices to unlock a Windows PC.

Microsoft published its roadmap shortly after rolling out the first Windows 10 build to business PCs since the OS launched in July 2015. 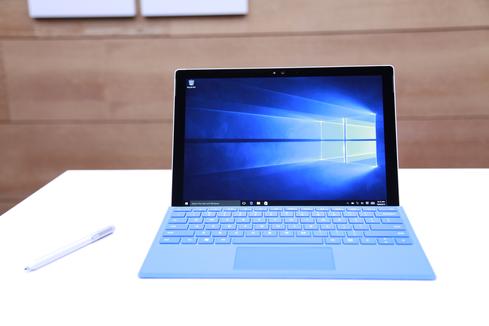 As part of the new Windows update system, new features are first rolled out as Current Branch (CB) releases, so businesses can conduct pilot deployments. Updates are released to Current Branch for Business (CBB) after businesses, OEMs, and partners have tested and confirmed they're ready for the rollout.

The idea is to create a lengthier test period for builds so Microsoft can address errors before they appear on corporate devices. Build 10586, or version 1511 of Windows 10, was declared CBB-ready on April 8. It was first released to Windows Insiders in November 2015.

Build 10586 will roll out to business PCs over the coming weeks, said Microsoft, with updates published via Windows Update, Windows Update for Business, and Windows Server Update Services. For devices already updated with version 1511, no action is required aside from usual monthly servicing.

The timing of update delivery will depend on which option IT managers chose. For example, devices served by Windows Update for Business and configured to "defer upgrades" will receive Windows 10 version 1511 as soon as Microsoft publishes the update.

Kelly Sheridan is the Staff Editor at Dark Reading, where she focuses on cybersecurity news and analysis. She is a business technology journalist who previously reported for InformationWeek, where she covered Microsoft, and Insurance & Technology, where she covered financial ... View Full Bio
We welcome your comments on this topic on our social media channels, or [contact us directly] with questions about the site.
Comment  |
Email This  |
Print  |
RSS
More Insights
Webcasts
Multi-Cloud Data Management for Modern Applications
How the Rapid Shift to Remote Work Impacted IT Complexity and Post-Pandemic Security Priorities
More Webcasts
White Papers
Enabling Enterprise Resiliency Through Cyberthreat Detection
Brand Protection During a Global Pandemic
More White Papers
Reports
We Need Your Input: Trends in Workforce Optimization
The Infoblox Q4 2020 Cyberthreat Intelligence Report
More Reports