IBM Watson Engagement Advisor will support USAA customers who are leaving the military. Can Watson do better than conventional web and mobile support systems?

IBM and USAA announced Wednesday that IBM Watson is taking on the challenge of advising US military personnel on a range of financial and life decisions when they decide to transition to civilian life.

Watson is cognitive computing technology that learns and improves accuracy with each use. USAA is using the IBM Watson Engagement Advisor, a version designed for customer-service and support roles, to respond to myriad, potentially complex questions that customers might ask about leaving the military. Watson has been in service on the USAA.com site for eight weeks, accessible in 50 states. In August the provider of insurance, banking, investment, and retirement products plans to add support through a Watson-powered USAA mobile app.

"More and more of the interactions that we're getting from our members are coming through our digital channels, including our web and mobile sites, so we're trying to make these channels as adept at delivering advice as a human being in our call center," said Neff Hudson, USAA's VP of emerging channels, in a phone interview with InformationWeek.

USAA serves more than 10 million members of the US military and their families, and each year more than 150,000 active military members transition to civilian life, according to the Bureau of Labor Statistics. USAA chose the Military Separation sections of its web and mobile sites for a Watson pilot project because it involves an array of complex topics including education, health insurance, housing, and retirement decisions. 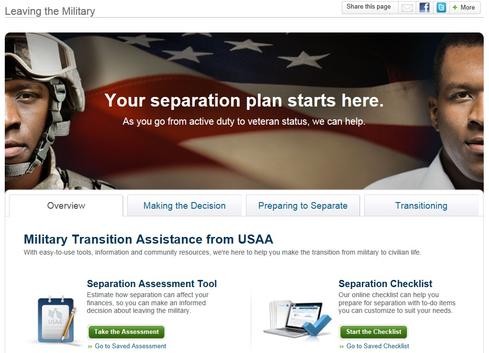 "We've had scripted solutions where we could guide people through a Web tree to a set of answers, but it was just that, scripted and based on what we know today," said Hudson. "Military separation is a finite problem, but I wouldn't say it's easy. We want to use cognitive computing to mash up personal insights with information that's more freely available through public sources."

Watson is interacting with registered users of USAA's website and mobile site, so it can combine its cognitive capabilities with some scripting based on what's known about each customer. Watson was initially trained on 3,000 documents, including USAA documents and content from external sources including the Veterans Administration and the Department of Defense. After an initial "bootcamp," Watson's rollout didn't go quite as planned.

Whereas IBM and USAA trained Watson for questions that were specific to details of things like insurance policies and the GI Bill, the questions submitted in early rollouts were much more general and open ended, according to Hudson. Customers can type in questions on the website and will have the option of speaking questions about military separation on the mobile site.

The information that's available to military personnel is often written like dense legalese, with lots of acronyms and rules, said Hudson, so part of the challenge for Watson was providing context to make that information simpler and easier to understand.

With the additional tuning that was required, the Watson rollout took eight months. Hudson says it's too soon to measure Watson performance gains tied to its self-learning capabilities, but he insists the technology has significant advantages over conventional scripted systems and rules-based decision trees.

"People expect to be able to ask a very natural question and get a very precise personal response, but that's not something you can do with scripted response systems," said Hudson. "The beauty of Watson is that we can offer an unscripted response and then learn from the interactions. We're dealing with life choices, and there might be many different paths to the same result depending on the person we're trying to help."

Just as IBM sought out industry leaders in healthcare including Memorial Sloan-Kettering Cancer Center and Cleveland Clinic as development partners for Watson, IBM sought out USAA because it's a leader in customer-satisfaction ratings and Net Promoter Scores, according to John Gordon, VP for IBM Watson Solutions.

"We want to reshape the future of customer experience, and the conclusion IBM and USAA both reached is that traditional methods of delivering this kind of personalized advice don't scale," said Gordon. "You may be able to write a small tree for a small problem, but when you think about the complexity and the number of issues that USAA helps its members address, they needed a system that could learn, get better, and continue to expand its expertise."