Robot problems? Here's a glimpse of some of the things that go down at Blackhat and DefCon.

I was at BlackHat and DefCon last week, when I saw a security guard get angry at a robot. It began when I asked this guy to stop so I could take a photo of his robot. The security guard, however, got mad that the hacker had his robot on the floor. Why? I'm not sure. It was blocking the main corridor. Or maybe he didn't know if it was allowed. All the security guy said was, the robot was causing a serious problem. The robot owner picked up the robot and headed back to his room.

I laughed because I thought, he's going to have a fun weekend ahead of him. While at a conference with hackers, I saw lots of hackers carrying around their own personalized robots.

In the future, I think we'll have to figure out how to properly treat robot owners and their robots because nobody wants to be in trouble like this guy was. As more people have personal robots that they take on vacation or on walks, we will have to think about our rights to have them with us in public and consider other ethical consequences. 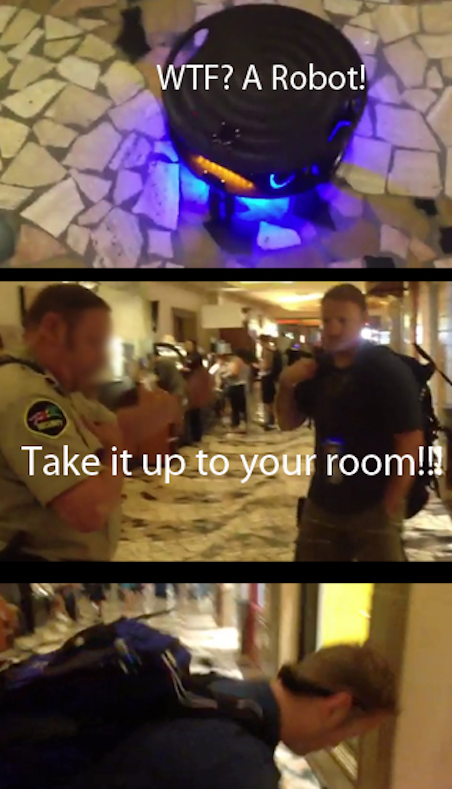 We welcome your comments on this topic on our social media channels, or [contact us directly] with questions about the site.
Comment  |
Email This  |
Print  |
RSS
More Insights
Webcasts
Data Security, Governance, and Privacy in an Age of Analytics
Practical Approaches to Implementing Zero Trust in Your Private Cloud
More Webcasts
White Papers
False Positives in Web Application Security
A Guide to Taking a More Proactive Approach with Data Security
More White Papers
Reports
How Enterprises are Attacking the Cybersecurity Problem
The Infoblox Q1 2021 Cyberthreat Intelligence Report
More Reports
Copyright © 2022 UBM Electronics, A UBM company, All rights reserved. Privacy Policy | Terms of Service