The pharmaceutical company uses technology to bring new openness -- and efficiency -- to lifesaving research. One in a series of profiles of InformationWeek 500 innovators.
Charles Babcock
Editor at Large, Cloud
September 07, 2011
Combine an intense ambition to slash the 10 years and $800 million it takes to develop new medicines with the ability to encode promising new compounds so they can be digitally tested without revealing their full traits. Add academic researchers worldwide who'd like to know if they've discovered a valuable new drug, but are wary of handing it over to a big drugmaker. The result is Eli Lilly's inspired Open Innovation Drug Discovery program.

Essential to Lilly's intellectual property are the tests, known as assays, that it's developed over many years to see whether a compound has potential to yield a new drug. Assays determine, for example, the likelihood a new compound could choke off the blood supply to a tumor--a long-sought means of arresting cancer--or whether a molecule is accepted by a particular protein receptor.

Lilly thinks applying these tests to a much wider set of promising compounds could speed development of drugs to fight cancer, Alzheimer's, diabetes, osteoporosis, and other diseases. Giving the test results free to researchers in universities, biotech firms, and research institutes also could guide efforts toward the most promising lines.

From a business perspective, Lilly patents will soon expire on key revenue drivers such as Zyprexa, a schizophrenic treatment drug that represented 22% of its revenue, or $5 billion, in 2010. It needs new drugs to replace that revenue.

But researchers fear losing ownership of a promising compound to a pharmaceutical behemoth. So Lilly Research Laboratories' IT team developed a system that lets researchers submit compounds using a website outside Lilly's firewall, while encoding the characteristics using digital descriptors without revealing full details of the compound. The site compares the descriptors with Lilly's long list of identified compounds. A compound's properties are evaluated, free, on the site by automated cheminformatics tools, running the compound against Lilly's assays to indicate whether further testing of the substance would be worthwhile.

The outside researcher controls this automated analysis, triggering whether to let evaluations proceed, and all the data and intellectual property rights are kept by the researcher. An identification "never crosses our firewall. Everything stays on the public website," says Alan Palkowitz, architect of the Open Innovation system and VP of Lilly's discovery chemistry and technologies group. 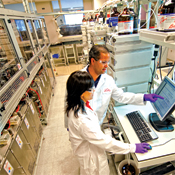 In the past, outside research required multiple evaluations by Lilly staff before being determined to have potential. The Open Innovation tools reduce this manual manipulation, says MaryJo Zaborowski, information officer for Lilly Research Laboratories. "We had to make this as lean as possible," says Zaborowski.

If both sides agree there's potential after the digital screen, the researcher can submit compounds for lab testing. Lilly then has a window of time to exclusively negotiate with the researcher, but the researcher maintains IP and data rights.

The system has been in place since June 2009, and 400 researchers affiliated with 245 institutes, universities, and biotech firms have submitted. It's resulted in two signed agreements, with a third pending.

In addition to getting around intellectual property worries, "we liberated a lot of time with this process," Zaborowski says. Lilly's staff can concentrate on new compounds they're working on, while it hopes researchers around the world are drawn to its front door to more easily see if they've hit on something big. "That's what we're counting on--the open source, collaborative model," she says.