Designed to compete with SharePoint, Huddle is an iPad app positioned as a content discovery and recommendation platform that can find documents for you.
Boonsri Dickinson
Associate Editor of BYTE
June 27, 2012

At the Mobile Connect conference in Boston last week, there was a lot of chatter about how email is slowly dying, and which mobile apps can boost productivity without compromising security.

That's why the new iPad app Huddle looks particularly interesting, and somewhat promising. Launched Tuesday in the Apple App Store, Huddle goes a step further than most productivity and collaboration apps. It actually recommends files to users. What this means is that users don't have to send files through email to collaborate or worry about always updating the most current version. Instead Huddle can actually recommend files that the workers might not even be aware of and surface the information for them.

Watch the video below to see how it works.

Besides intelligent recommendation, Huddle offers the following: a social activity stream, Microsoft Word and Excel editing, task approval, PDF annotation, email integration, and mobile security. It works with Google QuickOffice, Readdle, and Fileboard. For instance, a sales team can mark a sales presentation as a favorite and will get access to it off-line.

"In an ideal world, we won't have to exert the effort of searching the Internet for the things we want because the Internet will automatically deliver what we want to us, when we need it," said Huddle co-founder Andy McLoughlin. "The predictive intelligence and recommendation technology present in products like Amazon, Pandora, iTunes, and others, helps people discover new things based on things they already like, without searching." 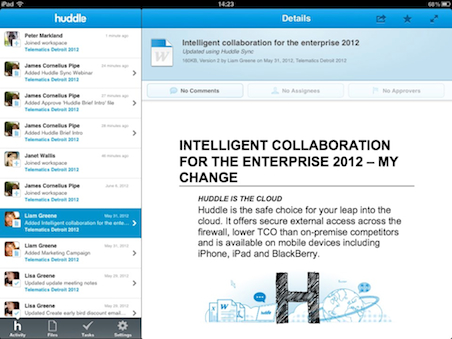 Is Huddle a glimpse of the future? I think so, as working from an iPad becomes more popular. I have a feeling I'm not alone in my plans to switch to an iPad for work. IDC estimates that the mobile worker population will increase from 1 billion in 2010 to 1.3 billion by 2015.

McLoughlin said that for businesses, Huddle is "an incredibly valuable function because content is no longer just idling in a data silo somewhere: it comes alive based on the work people do. It becomes actionable. When technology can predict all the content a worker will need and delivers it to all the workers' devices without the need to search, productivity skyrockets--and when a worker discovers a useful file that a colleague across the world has created based on an intelligent recommendation, true collaboration is born."

McLoughlin added that Huddle was developed with security in mind, by allowing IT managers to control who has access to certain files.