Volkswagen AG CEO Martin Winterkorn resigned on Wednesday, a casualty of the growing scandal over the company's use of software designed to cheat on emissions tests in certain cars with diesel engines.

"I am shocked by the events of the past few days," said Winterkorn in a statement. "Above all, I am stunned that misconduct on such a scale was possible in the Volkswagen Group."

Winterkorn, who survived an attempt to oust him earlier this year, said his resignation would offer the company a fresh start. He said he was stepping down in the interest of the company, without being aware of any personal wrongdoing. 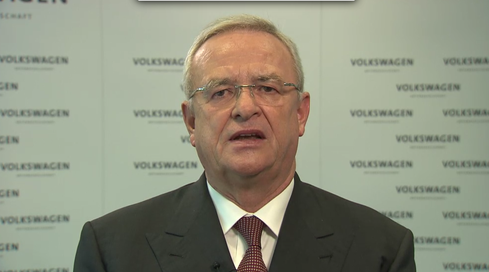 On Friday, the US Environmental Protection Agency (EPA) and the California Air Resources Board (CARB) charged Volkswagen AG, Audi AG, and Volkswagen Group of America, with employing software -- a "defeat device" -- deliberately designed to limit engine emissions during regulatory testing in 482,000 US vehicles.

Volkswagen on Tuesday acknowledged that the deceptive software exists in 11 million of its cars worldwide.

The Guardian estimates that, globally, Volkswagen's vehicles could be responsible for the release of an extra 250,000 to a million tons of nitrogen oxides (NOx) into the atmosphere annually, potentially as much as the entire UK's NOx emissions from all of its power stations, vehicles, industry, and agriculture combined.

According to the EPA, NOx emissions contribute to the particulate pollution and have significant health effects, such as the aggravation of respiratory conditions and premature death.

Volkswagen said it is setting aside €6.5 billion ($7.2 billion) in its third quarter to cover costs arising from the scandal.

That may not be enough. The EPA alone could potentially seek fines of up to $18 billion. But the largest environmental penalty in the US, imposed on Andarko Petroleum Corporation, reached only $5.5 billion.

However, in the wake of Volkswagen's acknowledgement of the issue, regulators around the world have become involved. Authorities in Canada, France, Germany, Italy, Japan, South Korea, and Switzerland have either opened inquiries or expressed their intention to do so. There have also been at least 37 lawsuits filed against Volkswagen since Friday, according to Süddeutsche Zeitung.

With Winterkorn's departure, Volkswagen's stock price has recovered some of the ground it lost. As of midday Wednesday, the company's market capitalization stood at about $67 billion, down from about $86 billion when the emissions deception was revealed.

Thomas Claburn has been writing about business and technology since 1996, for publications such as New Architect, PC Computing, InformationWeek, Salon, Wired, and Ziff Davis Smart Business. Before that, he worked in film and television, having earned a not particularly useful ... View Full Bio
We welcome your comments on this topic on our social media channels, or [contact us directly] with questions about the site.
Comment  |
Email This  |
Print  |
RSS
More Insights
Webcasts
Monitoring Critical Cloud Workloads
4 Practical Tips for Building a Data Lake
More Webcasts
White Papers
Zero Trust Guiding Principles
A Practical Guide to Enabling 5G Deployments
More White Papers
Reports
2021 Email Threat Report
Planning Your Digital Transformation Roadmap
More Reports

Ultimately, workmanship and marketing are two different things -- but what brand damage you set yourself up for when you promise things that you don't deliver!
Reply  |  Post Message  |  Messages List  |  Start a Board

The problem with a lot of these "greener" cars -- especially all-electric ones -- is that the very manufacture of them, with their more sophisticated materials, winds up creating a bigger carbon footprint than the use of a traditional car would.

Perhaps one day it won't have to be this way, but presently, the only significant environmental impact electric cars have is to move pollution from rich neighborhoods to poor ones.  (See the 2013 IEEE article titled "Unclean at Any Speed.")
Reply  |  Post Message  |  Messages List  |  Start a Board

@Pablo: I don't know what it is, and I know it's irrational, but there's something about this scandal that makes it more outrageous to me for some reason.  Just the fact of programming the devices specifically for the purpose of cheating regulators seems more problematic to me than traditional data fudging/hiding.
Reply  |  Post Message  |  Messages List  |  Start a Board

I'm waiting to see if Audi and/or other manufacturers have also been doing the same thing, and whether or not VW was alone here or if this sort of cheating was an industry standard.
Reply  |  Post Message  |  Messages List  |  Start a Board
InformationWeek Is Getting an Upgrade!