NASA's New Horizons team is plotting to swing the spacecraft past the exotically named 2014 MU69 in the Kuiper Belt.

Call it a galactic victory lap. Following New Horizon's astoundingly successful flyby of the solar system's ninth planet -- or dwarf planet, depending on which camp you belong to -- NASA scientists are turning the spacecraft towards a new target.

The space agency announced it has selected the potential next destination for the New Horizons mission, a small Kuiper Belt object (KBO) known as 2014 MU69 that orbits nearly a billion miles beyond Pluto.

The Kuiper Belt region of the solar system is located beyond the planets, extending from the orbit of Neptune to approximately 50 astronomical units (AU) from the Sun. One AU is equivalent to the distance between Earth and the Sun.

Similar to the asteroid belt, the Kuiper Belt it is far larger -- 20 times as wide and 20 to 200 times as massive, according to a report from the Institute for Astronomy at the University of Hawaii. 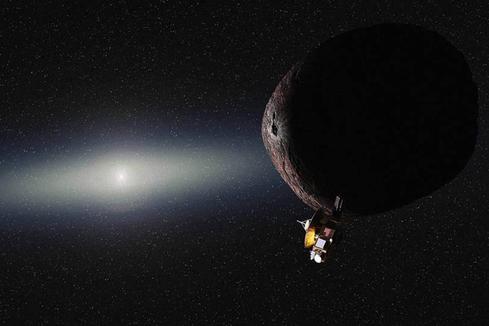 The New Horizons team must write a proposal to the agency to fund the KBO mission. That is due next year and will have to be evaluated by an independent team of experts before NASA can decide about the go-ahead.

"Even as the New Horizon's spacecraft speeds away from Pluto out into the Kuiper Belt, and the data from the exciting encounter with this new world is being streamed back to Earth, we are looking outward to the next destination for this intrepid explorer," John Grunsfeld, astronaut and chief of the NASA Science Mission Directorate at agency headquarters in Washington, wrote in an Aug. 28 statement.

"While discussions whether to approve this extended mission will take place in the larger context of the planetary science portfolio, we expect it to be much less expensive than the prime mission while still providing new and exciting science."

The spacecraft was originally designed to fly beyond the Pluto system and explore additional Kuiper Belt objects. It carries extra hydrazine fuel for a KBO flyby.

[Check out these stunning NASA photos.]

The planning for the next stage of New Horizons' mission has been in the works since 2011. It employed high-powered terrestrial telescopes and the Hubble Space Telescope. Meanwhile NASA scientists are still waiting for the spacecraft to transmit the bulk of the images and other data stored on its digital recorders from its July encounter with the Pluto system.

"2014 MU69 is a great choice because it is just the kind of ancient KBO, formed where it orbits now, that the Decadal Survey desired us to fly by," New Horizons principal investigator Alan Stern, of the Southwest Research Institute (SwRI) in Boulder, Colo., said in a statement. "Moreover, this KBO costs less fuel to reach [than other candidate targets], leaving more fuel for the flyby, for ancillary science, and greater fuel reserves to protect against the unforeseen."

Nathan Eddy is a freelance writer for InformationWeek. He has written for Popular Mechanics, Sales & Marketing Management Magazine, FierceMarkets, and CRN, among others. In 2012 he made his first documentary film, The Absent Column. He currently lives in Berlin. View Full Bio
We welcome your comments on this topic on our social media channels, or [contact us directly] with questions about the site.
Comment  |
Email This  |
Print  |
RSS
More Insights
Webcasts
Building the SOC of the Future: Next-Generation Security Operations
ROI and Beyond for the Cloud
More Webcasts
White Papers
A Technical Deep Dive on Software Exploits
What To Consider Before Renewing Your SD-WAN
More White Papers
Reports
Are Unprotected Cloud Databases Leaking Your Data?
How IT Security Organizations are Attacking the Cybersecurity Problem
More Reports

@Gary_EL I don't think I'm wrong when I say that to become a "spacefaring race", we need to master human hibernation, and most likely going faster than 58,536 km/h; which is the New Horizon's escape trajectory.
Here is a nice take on human hibernation:


@Whoopty I read that the New Horizon will reach the KBO in 2020, and its official mission will end in 2026.
And I thought the probe was in its last legs after Pluto!
Reply  |  Post Message  |  Messages List  |  Start a Board

As long as the power sources last, New Horizons has many years and potentially decades of use to mankind as it explores the far reaches of our solar system and beyond. I'm really excited to see what else it sends back over the next year though. I imagine some of the up close images of Pluto will be astounding.
Reply  |  Post Message  |  Messages List  |  Start a Board

It sounds contradictory to say so when talking about space missions, I know. But, anything out that far will have to be all robots, not humans. What I want to see is people going to space, with robots used when to do so would be advantageous, just like here on Earth. I want us to become a spacefaring race, not merely a race that sends out machines.
Reply  |  Post Message  |  Messages List  |  Start a Board
Editors' Choice
Hot Topics