21 comments
Comment Now
From fighting terror with tech to backing net neutrality to worrying about AI, here's a look at what some of the 2016 US Presidential hopefuls have on their tech agendas. 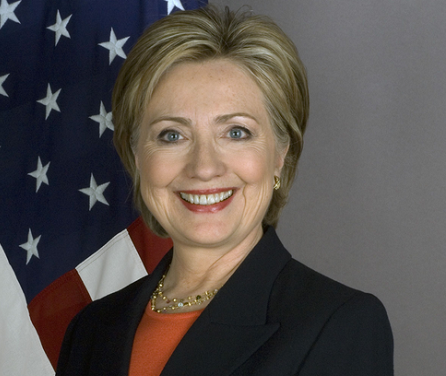 Hillary Clinton has asked the business disruptors of Silicon Valley to help the government disrupt the work of ISIS.

"Right now terrorists communicate on very ubiquitous sites: YouTube, Twitter, Facebook. ... We're going to have to have more support from our friends in the technology world to deny online space," Clinton said during a Dec. 6, 2015, speech before the Brookings Institution.

She added that she expects such language will bring complaints about "freedom of speech, et cetera." But if the US is in a war against terrorism, "then we've got to shut off their means of communicating."

(Image: US Department of State)

Sorry for giving you that misconception(that I think you are a Hillary Supporter);I was saying people in General.

Yes,you are absolutely right she is very,very smart (in an evil and twisted sort of way).

What disgusts me the most about her is the fact that she is so brazen in her corruption!

Kasich would be a good choice,Unfortunately right now it looks like a Toss-up between Bernie Sanders,Clinton and Trump.

I don't know who would amongst these three would win however.

@ashu001, you misinterpret my comments as being a Hillary supporter. She may be many things to many people but stupid/naive she is not. If she chose to use private email, it was for a reason, not lack of tech savvy from advisors. She is also not stupid enough to put anything illegal in any email system. If you are shocked power people are grabbing money wherever and peddling their influence for supporters/relatives, where have you been? I've read your posts, you are certainly no dummy.

If I had to pick any of this bunch, it would be Kasich. I'm originally from Ohio and he is a Republican gov with a Dem legislature and they still manage to function. I live to in Wisc now, it's beyond belief the divide Walker has created here despite doing absolutely nothing meaningful for the state by any measure you want to use.

Our system here in US is so screwed up that Gandhi, Mother Theresa and Jesus himself could not fix it. I don't even know why anyone even wants to be President anymore. It's a Catch-22, the fact you even want the job shows there is something seriously wrong with you.
Reply  |  Post Message  |  Messages List  |  Start a Board

But unfortunately that's not how Politics works in America.So we have to chose between Donald Trump,Hillary Clinton &Bernie Sanders.

I am for anybody but Hillary.

I personally think it works both ways.

There are companies for whom Technology really is a Key Competitive Differentiator-Like GM.

They are doing more to bring all their IT back in-house.

Then there are others who just use IT for the sake of their Business;in those cases it really does'nt matter much whether they outsource or keep everything in-house(whichever gives them the lowest cost if most important).

Especially as Short-termism has repeatedly prevailed in most Executive Groupthink(Primarily for Compensation reasons) I am really not surprised that they tend to favor Outsourcing much more aggressively than keeping all those critical employee assets in-house.

Its astounding how anyone (there are many Americans even today who do)could still Give Hillary Clinton the Benefit of Doubt even after the numerous ways in which she's constantly sold the Interests of Ordinary Americans to the Highest Bidder out there(could be Domestic or Foriegn-as long as they pay Top Dollar;No Problems).

The No.1 Reason why Hillary did'nt want use the Official State Department Email address was simple-She did'nt want to handover any of the incriminating material over to Governmental Watchdogs.

I could go on and on and on.. regarding Hillary Clinton.

Suffice to say every single Vote for her is a vote against America today.

No question @nomii. Hillary herself not tech savvy, I saw content of one of her emails where she didn't know how to connect to wifi on her phone. But I'm guessing government email servers did not run pushmail to phones, she wanted the convenience also. We will never know if my theory she wanted more control over leaks is true or not. You can bet she (her advisors) never counted on FBI/Justice Dept getting involved.

My wife works for VA as a nurse. Her work email is so locked down she can't even open a Google docs page to check on our daughters school stuff, she has to forward to me to do it. That may have been another reason she opted out of gov email. But just seeing what calculated person she is, I'm betting control was her primary motivation. But you are right, relying on advisors gives her great cover and deniabilty.
Reply  |  Post Message  |  Messages List  |  Start a Board


@Terry Agreed . Sometimes I get confused after reading comments like "unaware". Do you buy this idea that a person who is running for such an important post do not have "advisers" on these pity issues. They have advisers on every kind of legal affairs though. I am sure its all very well calculated moves to hide something on calculated advice of some unknown "advisers"  :) what do you say?


@Datalas true observation. In my opinion that is the main reason outsourcing is being considered by most of the best brands in US. It will increase their productivity by reducing cost and increasing profits and with foreign labels they will not be subjected to laws of country. I believe that snowden has opened a pandorabox which will take longer time then thought to be subsided. What is your opinion?


@Daniel very true. Now a days we need security in all spheres of life whether it is physical or cyber security. US Presidential candidate Donald Trump is proclaiming to provide US with physical security by willing to built biggest wall ever built with Mexico but I am not sure if he is aware of any other form of security not to mention cybersecurity?