MTM's Kleyman: Build Your Business on a Secure IoT - InformationWeek

CTO of MTM Technologies Bill Kleyman says your future customers will reach you over the Internet of Things.

MTM Technologies' CTO Bill Kleyman didn't want to be restricted to a podium, or for that matter, the front of the room. He wanted to carry his message to the center and to the edge, just as he wanted his listeners to ply the edge of the network in their own Internet of Things.

Kleyman paced the Interop session hall restlessly as he predicted each of us will be using eight connected devices by 2020, and those connections will help us live in "a smarter ecosystem," he said. (The highest number of devices on one person attending his session Wednesday 17 May was four; several were carrying three.)

Refrigerators will soon order milk for us when we need it. Our thermostats will wait until the demand for electricity is at a low point in the daily cycle, then direct the washing machine to do its load, garnering a lower rate. It's all part of how "the Internet of Things is at the core of the digital revolution," said Kleyman, and those who know how to steer their businesses onto the IoT will enjoy clearer consumer feedback and better customer engagement, Kleyman said.

The title of his session was How IoT Impacts Your Cloud Security Strategy but it could have been, "Get Ready to Embrace the Internet of Things. Your future business will be conducted on it." His firm, MTM Technologies of Stamford, Conn., is an IT consulting firm to mid-sized companies and large enterprises.

Not that Kleyman neglected the topic of security. IT staffs must provide security for each component of the Internet of Things. Those components are compute, connectivity, security, analytics, ecosystem and services.

"Just because a device is stupid doesn't mean it won't be targeted," he warned. More network intelligence is needed to act as the enforcer of security across the IoT devices and their network.

With proper security, the Internet of Things will grow rapidly into a new platform for the establishment of business connections, collecting customer transactions and other information and issuing new services. 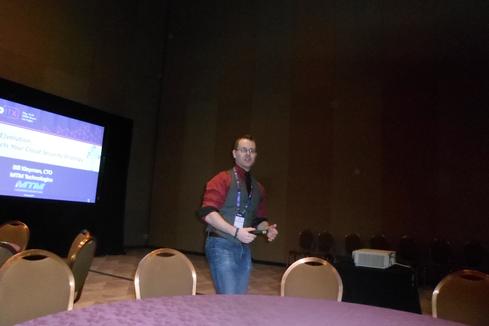 For the future to work, it will need to be a secure and connected place. Digital citizens will find themselves finding the services they need, goods they want and interactions they're seeking by participating in an ecosystem that's based on an Internet of Things.

"The future is a fascinating place," Kleyman said, still in motion as he wrapped up his message. He relishes both being part of it and advocating the IoT as a means to get there.