Looking to tune into a new television paradigm? Apple's fourth-generation Apple TV box reaches stores today and promises to change how you interact with your television set.

"It's all about apps," says Apple of its new Apple TV.

The iPhone-maker's latest set-top box goes on sale at Apple Stores, Best Buy, and other retailers today. Apple touts the wholly refreshed companion product as no less than "the future of TV."

The new Apple TV, which mostly resembles the third-generation product, costs $149 or $199, depending on the storage option you select. It is powered by the A8 processor, a huge upgrade from the processor in the older model. The remote has been remodeled, too, and now includes a glass-covered touchpad for interacting with the box. The remote features a rechargeable battery, which plugs into Apple's Lightning cables. An internal accelerometer and gyroscope allow the remote to be used to control games, rather like Nintendo's Wii controllers.

If Apple TV were a movie, the hardware would simply be the prologue. The meat of the story is hiding inside. Apple has ditched the software from previous generations of Apple TV in favor of tvOS, a legit platform with its own SDK and APIs for developers. This, of course, means the new Apple TV runs apps and includes Siri, Apple's quirky personal assistant.

At launch, the selection of apps appears to be rather limited. For example, there are only a handful of games. Apple says hundreds more are on deck. Some apps are simply giant renditions of the corresponding iPhone/iPad version. This will obviously improve over time as more developers sink their hooks into the SDK. 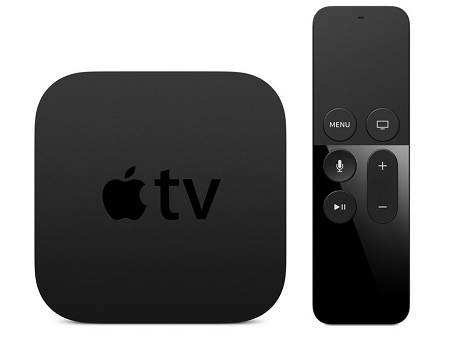 Siri is the shining star of Apple TV, despite its limitations. Press and hold the Siri button on the remote, and ask away. Users can ask Siri to find TV shows and movies based on genre, actor/actress, director, or even by decade. Results are displayed in universal landing pages that are simple to understand and interact with.

Siri can control playback as well, including skipping forward or backward and playing or pausing. Siri can also provide information, such as IMDb data, when asked who's starring in the movie. Many seem to appreciate a feature that rewinds the video by 15 seconds when asked, "What did he/she just say?"

Siri can't interact with every app on Apple TV yet, and that leads to some frustration. For example, Siri is limited to searching iTunes, Netflix, Hulu, HBO, and Showtime for video content. That means Amazon Prime Video subscribers and fans of YouTube are out of luck. Siri doesn't yet work with Apple's own iTunes Music service, though CEO Tim Cook said Apple hopes to add that feature soon.

Apple TV has two other drawbacks. First, Apple omitted the optical out port for high-quality audio; the only AV connector is HDMI. Second, Apple TV doesn't support 4K; it is limited to 1080p HD. Apple was slow to upgrade earlier versions of Apple TV from 720p to 1080p, and the new box's lack of 4K isn't a surprise. Apple doesn't yet offer 4K content via iTunes. Most people don't have 4K TVs, and the idea of pushing loads of 4K content over Internet connections likely has broadband providers cowering in their boots.

If the $150 start price has you turned off, you may want to consider Google's new Chromecast as an alternative. It costs $35, and interacts with a commendable selection of apps and video services on both Android and iOS devices.

Eric is a freelance writer for InformationWeek specializing in mobile technologies. View Full Bio
We welcome your comments on this topic on our social media channels, or [contact us directly] with questions about the site.
Comment  |
Email This  |
Print  |
RSS
More Insights
Webcasts
Building Asset Management into Your Enterprise Security Strategy
Take DevOps to the Next Level
More Webcasts
White Papers
Cybersecurity Report Card
The Five Major Security Pitfalls of WFH and How to Solve Them
More White Papers
Reports
Are We Cyber-Resilient? The Key Question Every Organization Must Answer
2021 Top Enterprise IT Trends - Network Computing
More Reports