The world's largest computer maker is looking to leverage the millions of PCs it sells every year to build a huge platform that will prove attractive to app developers.
Antone Gonsalves
Contributor
March 10, 2011 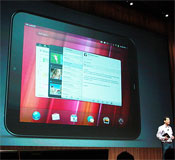 Hewlett-Packard is getting ready to embed WebOS, the operating system it acquired last year in the purchase of smartphone maker Palm, in all of its Windows PCs, building a huge platform for developers to offer applications.

HP chief executive Leo Apotheker told the Bloomberg news agency in an interview that WebOS would run, in addition to Windows, in every PC HP ships starting in 2012. The idea is to offer a large enough platform and potential user base to entice developers to build applications that would differentiate HP PCs, and eventually its smartphones and tablets, from others in the market. "You create a massive platform," Apotheker said.

HP shipped last year more than 64 million desktops, laptops, and netbooks worldwide, according to IDC, so the number of potential users that developers could reach is more than any other computer maker. "Essentially what they're trying to do is create a separate software ecosystem that will draw developers because it will quickly be very large," Frank Gillett, analyst for Forrester Research, said in an interview Wednesday.

HP is tearing a page from Apple's iOS playbook, which was copied by Google with its Android operating system. Both vendors offer online markets where developers can sell apps that run on smartphones and tablets using the companies' respective operating systems. Apple also has an online app store for the Mac, which runs the company's proprietary OS X that's only available on the Apple computer.

HP is way behind Apple and Google in the app game. Where developers have built hundreds of thousands of apps for Google and Apple devices, only 6,000 apps have been built for WebOS, HP told Bloomberg. So it makes sense that HP would connect its personal computers, smartphones, and tablets through a common operating system to allow developers to offer software across all the devices. The company's plans become even more apparent when one considers its recently announced Synergy service.

Synergy would enable people who buy HP's new TouchPad tablet to sign into their Facebook, Google, LinkedIn, Yahoo, and other online accounts and have all the contact, calendar, and e-mail information stored in the TouchPad. Gillett believes HP will expand that service to include synchronizing music, video, and other content between all HP devices. Apple currently offers such a service, called MobileMe, for all its products.

"I call ideas like this 'personal cloud ecosystems,'" Gillett said. "Typically, trying to create a set of services that is built around individuals and their information instead of around the device and its operating system."

Switching focus from the device to storing and synchronizing personal information on multiple devices makes it less likely customers will abandon a vendor. "At the end of the day, you'll prefer to buy an HP device, because they take better care of you and your information, no matter which HP device you're using, and so you'll develop a preference for devices that use HP Synergy" Gillett said.

Not all analysts agree with Gillett. Ken Dulaney of Gartner said it wouldn't make sense for HP to put WebOS in all its PCs, because many customers would have no use for it. Rather than use HP to sync data between devices, Dulaney said people can use cloud services from Google or other vendors, which are not tied to any hardware. "Why get locked into HP?" Dulaney said in an email.

"If they are using the prospect of PCs to overcome the issue of a lack of apps for WebOS, I think they need to think again," he said. "I see the two markets as separate."

HP apparently sees things differently, and the customer will be the final judge.