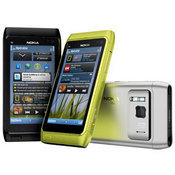 (click image for larger view)
Nokia N8
Nokia's highly-anticipated N8 smartphone is expected to launch at the end of September on the vendor's website for one week exclusively, before it is released for regular retail, according to the Nokia blog, NokNok. The N8 will come with a 12-megapixel camera with Carl Zeiss optics, Xenon flash and a large sensor similar to those found in compact digital cameras.

Despite its larger camera, the N8's processor will be slower than Samsung's high-end Galaxy S smartphone and the latest iPhone. The device will also feature the ability to create HD-quality videos and has editing functionality with a built-in editing suite. The N8 can be plugged into a home theater system so users can experience their videos with Dolby Digital Plus surround sound.

Among the social networking features are the ability for users to update their status, share a location and photos and view live feeds from Facebook and Twitter. The device's calendar can be used to synch events from social networks. The N8 also comes with free Ovi Maps and GPS.

Nokia is reportedly planning to take the wraps off several new smartphones, including one called the E7, during its Nokia World 2010 world media event next week in London.

The Symbian-based E7 is expected to be its flagship device, according to Reuters. It could also be the first in the E series to have a large touchscreen display. The device may also be a slider handset and come with a 640 x 360 pixel display along with a QWERTY keyboard. According to a leaked roadmap from a U.K. carrier, the E7 is set to ship in November, and may be the same device that was previously called the N8-02, which resembles the Nokia N9, running MeeGo. Published reports also indicate the handset may include an 8-megapixel camera on the back with dual LED flash, according to published reports.

Key to the sale of smartphones is the number of applications available to run on them. The stakes are high for Nokia, which does not yet have a large stable of software developers to create applications for its Symbian operating system, and the Finnish company has lost its competitive edge over Apple and Research in Motion in the high-end devices market.