Apple on Thursday plans to offer a beta version of its forthcoming OS X Yosemite desktop operating system to the first million people enrolled in its OS X Beta Program.

Announced during Apple's developer conference in June, OS X Yosemite marks the second of Apple's California-themed names for official OS X releases and the third of Apple's deviations in the past year from a tradition of polishing products in secret.

In April, Apple launched its OS X Beta Seed Program to provide customers with an opportunity to test updates to OS X Mavericks, the current version of OS X. Prior to that, the last OS X beta release, known as Mac OS X Public Beta, was available from September 2000 through March 2001 when Apple was soliciting feedback to improve the initial commercial release of OS X.

Under CEO Tim Cook, Apple has provided previews not only of its software but of its hardware too: last year it offered details about its Mac Pro workstation many months in advance of shipping the device.

Participating in Apple's OS X Beta Program -- which is distinct from the Beta Seed Program for Mavericks -- is free, but there may be non-monetary costs, such as time or data lost due to crashed applications. Apple warns the OS X Yosemite Beta "may contain errors or inaccuracies and may not function as well as commercially released software."

Another cost comes in the form of silence: Apple considers its beta software confidential and forbids beta testers from posting screenshots or discussing the software publicly. By agreeing to Apple's Beta Program terms, testers promise to take reasonable steps to keep Apple's software confidential, such as shielding the screen of a Mac running OS X Yosemite from onlookers. 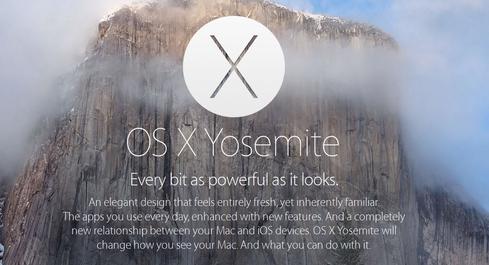 Despite Apple's focus on its iOS-based mobile products, the company's OS X-based desktop and notebook computers remain a major source of income and, surprisingly, growth. Apple on Tuesday reported $37.4 billion in revenue for its third fiscal quarter 2014, $5.5 billion of which came from the sale of some 4.4 million Macs. The company's Mac sales were up 18% in units and 13% in revenue from the same period a year ago, making Mac computers the company's fastest growing hardware line. Apple iPhone unit sales grew only 13% during fiscal Q3 and iPad unit sales declined by 9% during the same period.

OS X Yosemite will be free and the official release is expected to be offered as a download this fall.

Thomas Claburn has been writing about business and technology since 1996, for publications such as New Architect, PC Computing, InformationWeek, Salon, Wired, and Ziff Davis Smart Business. Before that, he worked in film and television, having earned a not particularly useful ... View Full Bio
We welcome your comments on this topic on our social media channels, or [contact us directly] with questions about the site.
Comment  |
Email This  |
Print  |
RSS
More Insights
Webcasts
Disaster Recovery/Business Continuity in the New Normal
The Experts Guide to Ransomware Response
More Webcasts
White Papers
Guide to Enabling 5G Deployments
Ransomware Security Breach Summary: Food Production
More White Papers
Reports
[Tech Insights] SASE's Pandemic Boost Likely to Stick
The Infoblox Q4 2020 Cyberthreat Intelligence Report
More Reports