Samsung admitted to altering the behavior of Microsoft's Windows Update tool, but claims to have good intentions.

Samsung found itself in hot water this week after a Microsoft researcher discovered the company was disabling automatic security updates for its Windows PCs. The company says it's not as bad as it sounds, but few are buying Samsung's explanation.

Microsoft's Patrick Barker found a program called Disable_Windowsupdate.exe buried in Samsung's own software update tool. The program blocks Windows Update from running automatically. If Samsung PC owners want their device updated with the latest security patches, they have to do so manually.

This made Microsoft angry.

"Windows Update remains a critical component of our security commitment to our customers," Microsoft shot back. "We do not recommend disabling or modifying Windows Update in any way as this could expose a customer to increased security risks. We are in contact with Samsung to address this issue."

Samsung PC owners can turn Windows Update back on, but Samsung's drivers will disable it again the next time the device is rebooted.

Barker checked in with Samsung, which explained to him, "When you enable Windows updates, it will install the Default Drivers for all the hardware on the laptop which may or may not work. For example if there is USB 3.0 on laptop, the ports may not work with the installation of updates. So to prevent this, SW Update tool will prevent the Windows updates." 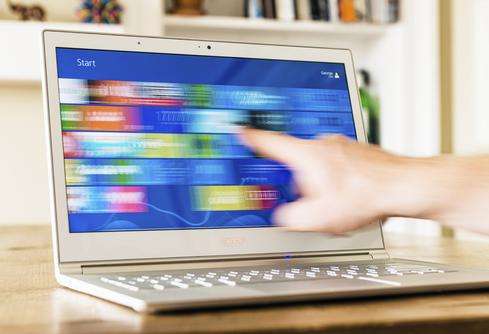 To put in another way, Samsung is saying Microsoft's drivers don't necessarily run well on some of Samsung's laptop components. In response, Samsung decided to shut them off. The company thinks its own software patches are more important than ones issued by Microsoft. The company flatly denies any sort of wrongdoing.

"It is not true that we are blocking a Windows 8.1 operating system update on our computers. As part of our commitment to consumer satisfaction, we are providing our users with the option to choose if and when they want to update the Windows software on their products. We take product security very seriously and we encourage any Samsung customer with product questions or concerns to contact us directly," said the company in a statement issued to media.

Barker says he is flummoxed by the response. "I don't understand what this statement is implying," wrote Barker. "I never implied it specifically blocked a 'Windows 8.1 OS system update,' just that their SW Update software is preventing Windows Update from automatically installing updates."

Is Samsung trying to deflect any further inquiries into this matter? It would appear so based on its responses so far.

Samsung device owners can still force their computers to install critical patches, but having those updates run automatically is the recommended way of doing things. One missed patch could be the difference between a hacked computer and a safe one. If you have a Samsung PC you might do well to check that the latest patches are on board.

Eric is a freelance writer for InformationWeek specializing in mobile technologies. View Full Bio
We welcome your comments on this topic on our social media channels, or [contact us directly] with questions about the site.
Comment  |
Email This  |
Print  |
RSS
More Insights
Webcasts
The Failures of Static DLP and How to Protect Against Tomorrow's Email Breaches
Building the SOC of the Future: Next-Generation Security Operations
More Webcasts
White Papers
Two-Factor Evaluation Guide
Cyber Threats & Trends: Jan-June 2020
More White Papers
Reports
How Data Breaches Affect the Enterprise (2020)
DNS Network Traffic Volumes During the 2020 Pandemic
More Reports

I didn't know Samsung made computers. Well, seriously, I think there's more than meet the eye here. Running Windows Update on computers with low resources ( e.g. 2 GB of RAM),  is a pain in the butt.
Windows Update services takes too much memory (sometimes up to 1 GB or more) when it runs and it does it whenever it wants.
I can understand if Samsung let he users run the WU manually. The question is, will they? And more importantly, as the article points out, will they run it in time to get the critical updates?
Reply  |  Post Message  |  Messages List  |  Start a Board

@Gary I am not sure I got your point correctly. I believe that what all is happening is without consent of samsung. I have my doubts. I think whatever the war between the giants will do it will invariably effect the consumers. I am nt sure it will happen to new or all inuse PCs. Lets wait and see.
Reply  |  Post Message  |  Messages List  |  Start a Board

Dr T I fully agree with you here. I am not getting it completely. I believe that once a deals made it must be a happy compromise between the two firms and everyone is in knowledge of what is all going to happen. I am not sure how MS can disable their automatic update without the knowledge of the samsung. There seems to be something not very rightly mentioned. What is your opinion.
Reply  |  Post Message  |  Messages List  |  Start a Board

Don't kill the messenger.
Whoever this guy is, according to the article, it seems that his report got into MIcrosoft ears. That's what it counts, isn't it?
Reply  |  Post Message  |  Messages List  |  Start a Board

I dunno, Dr. T. Microsoft is pretty good at things like terms, conditions and small print. I think they will take this as a direct challenge. They aren't going to allow Windows to be forked into a million versions, like Android. I predict that there will be WAR!
Reply  |  Post Message  |  Messages List  |  Start a Board

I would think they had enough protection in their terms and conditions with small prints so Samsung is protected. :--))
Reply  |  Post Message  |  Messages List  |  Start a Board

This is supposed to not work when you restart the machine again. Microsoft would most likely find another way to do windows updates. No vendors should e babel to disable it.
Reply  |  Post Message  |  Messages List  |  Start a Board


Then why is Samsung using those components in the first place? What right do they have to claim their machines are "Windows Compatible" if they aren't? Does this mean that owners of Samsung devices can't run windows update for fear of fouling up their non-complaint system? What about programs and processes that will depend on those updates? I see a GIGANTIC CLASS ACTION LAWSUIT on the horizon, as 10's (100's ?) of thosands of users sue to get their money back for what are now useless machines.
Reply  |  Post Message  |  Messages List  |  Start a Board

From everything I've read on this Patrick Barker does not work for Microsoft, but rather is a Microsoft MVP.
Reply  |  Post Message  |  Messages List  |  Start a Board
Editors' Choice
Hot Topics