Microsoft has launched an Alpha version of its Skype app for Linux. The software giant is also adding calling capabilities for Chromebook and Chrome.

Microsoft has released the Alpha version of its Skype app for Linux client, the company reported on July 13.

This move reaffirms Redmond's commitment to Skype on the platform following years of neglecting it. Upgrades to this version include a faster and more responsive user interface and the ability to share files, photos, videos, and emoticons.

The Skype for Linux Alpha can place calls to people who are using the latest versions of Skype on Windows, Mac, iOS, and Android. However, it cannot be used to make or receive calls to or from people with the previous version of Skype for Linux (4.3.0.37).

If you're eager to check out the new Skype for Linux, you can now download the app to test it. Microsoft hopes users will provide feedback so it can prioritize features as it continues to develop the app.

The Skype team has also released an Alpha version of Skype based on webRTC for Chromebook and Chrome. Users can now access web.skype.com to make one-on-one and group voice calls in addition to using current messaging features.

This marks Microsoft's first step to duplicate ORTC capabilities outside its Microsoft Edge browser. The ORTC media engine enables free voice and video calls on Skype without the need to download an additional app or browser plugin.

Microsoft first announced plugin-free calling with ORTC for Microsoft Edge in April. Now it wants to make Skype easier to launch on other platforms.

The Skype for Linux Alpha is extremely basic and currently limited to voice calls between computers. Microsoft promises that video calling and calls to landlines and mobile phones are coming soon to Chrome browsers for Linux and Chromebooks. Users can keep an eye out for updates. 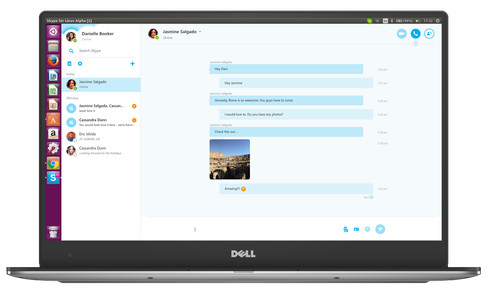 Today's Skype news marks the latest effort by Microsoft to make its software available on competitor platforms. Under CEO Satya Nadella the company has begun releasing versions of its applications for iOS, Android, and Linux, in addition to Windows.

Microsoft made a big move to welcome Linux in March, when it announced plans to port its SQL Server software onto Linux. SQL Server, its relational database management system, would not only sit on a Windows server. The company would give users the option to port it over to a server running a Linux OS.

The SQL Server announcement took the tech industry by surprise. It was a major sign that Microsoft was quickly abandoning its Windows-only focus in favor of a more open approach. Its decision boosted the market for SQL server and gave it a competitive advantage over database competitors like IBM's DB2 and Oracle.

Microsoft's launch of Skype on Linux is a sign it is acknowledging the success of its open approach to putting its software on alternate platforms. Redmond notes this launch is a sign it will continue to support Linux users in the years to come.

Kelly Sheridan is the Staff Editor at Dark Reading, where she focuses on cybersecurity news and analysis. She is a business technology journalist who previously reported for InformationWeek, where she covered Microsoft, and Insurance & Technology, where she covered financial ... View Full Bio
We welcome your comments on this topic on our social media channels, or [contact us directly] with questions about the site.
Comment  |
Email This  |
Print  |
RSS
More Insights
Webcasts
Unifying Your Endpoint Security Strategy
An Enterprise Guide to Web Security
More Webcasts
White Papers
GRC Buyer's Guide - 5 Steps to Success
The 2021 Small and Midsize Business Security Outcomes Study
More White Papers
Reports
Incident Readiness and Building Response Playbook
Gartner's Top 9 Security Trends in 2020
More Reports