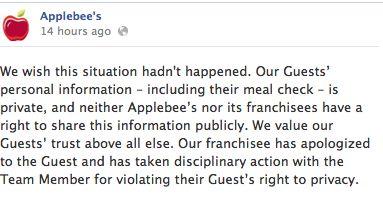 Applebee's
Restaurant chain Applebee's fired a waitress in St. Louis after she posted a photo of a customer's receipt that went viral on Reddit. Posting the receipt, on which the patron -- a local pastor -- wrote "I give God 10% why do you get 18?" violated corporate policy, the company said.

In an attempt to respond to the news coverage and share its side of the story, Applebee's posted a message on its Facebook page, part of which said: "Our Guests' personal information -- including their meal check -- is private, and neither Applebee's nor its franchises have a right to share this information publicly."

The problem, which thousands of Facebook followers noted: Just two weeks prior, the restaurant posted a picture of a note from a guest that featured the guest's name. Applebee's promptly deleted that photo, adding fuel to the angry customer's fire.

"I think BA simply has poor customer service so to expect them to do well on Twitter will require a much more basic improvement on their part."

I agree. I have friend who had an awful experience with BA. They lost his suit from the BA lounge. He had a long email discussion about the matter, which I read, and it was going from bad to worse. Too long of a story to tell here, but the point is as you said in the quote.

Yes, the London Luton Airport probably hired a first grader. Although so many times small kids have more common sense than adults that I am not sure about this. Being an adult doesn't necessarily mean being smarter, or having common sense.

I still think it comes down to knowing your audience. Social media managers should have a thorough enough understanding of their fans and followers to know how they'll react to a post.
Reply  |  Post Message  |  Messages List  |  Start a Board

@kristen the thing is that some posts that appear really bad in retrospect may have been considered perfectly fine by the powers that be until the backlash comes in. Sometimes it's not even the posts themselves but the reactions they bring on, like when McDonald's campaign inspired a lot of negative tweets about their products.
Reply  |  Post Message  |  Messages List  |  Start a Board

It's truly amazing how some posts -- by big corporations -- make it through. Or perhaps there needs to be an approval process before since something is posted since it appears that some people just lack common sense.
Reply  |  Post Message  |  Messages List  |  Start a Board

Oh, what a confusion! It was more to clarify what I had written. :)

When you think it can't get worse there is an SpaghettiO with the flag that proves otherwise. And it took a team to come up with that? Ha!

@Tom yes, and now we really have to add another one to the list: They had quite a bit of fun with that one at http://www.mediabistro.com/prnewser/uh-oh-spaghettios-social-media-pearl-harbor-fail_b79760