50%
Tweet
Can Windows 8.1 avoid the fate of Windows 8? Take a look at Microsoft's newest OS. 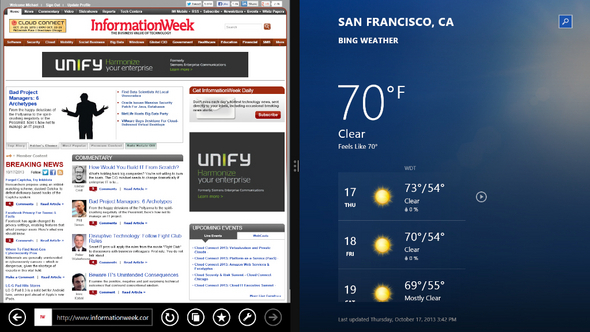 Windows 8 featured traditional multitasking in the desktop mode, but in the Modern UI, the "App Snap" feature allowed just two apps to be used at the same time. It also only allowed the apps to be displayed so that one of them occupied three-quarters of the screen, which limited the function's use on tablets and smaller-screened hybrids.

Windows 8.1 addresses these shortcomings by allowing users to snap together up to four apps. The update also gives users more granular control over how much of the screen each app occupies. In addition to snapping apps side-by-side, users can even layer open Modern UI apps on top of one another, giving the Live Tile interface a touch of the classic Windows desktop.

Where are the windows? I do not want to look at a screen filled with colorful boxes that have no meaning. It is overwhelming and hard on the eyes. Productivity is down with W8. Resizeable, overlapping windows was efficient. I could construct a work space for the task(s) at hand. Now I have a visual assault on my senses. W8 SUCKS. I want may W7 back.

I don't know what technical issues people are talking about, but the GUI alone is horrid and was the reason that the last new machine we bought I decided to downgrade to Windows 7 so that my less technically inclined spouse could use the thing without bashing her head against the keyboard in sheer frustration.  The sudden switch from an interface with the familiar start menu in the desktop seen at least as far back as Windows 95 which PC users grew accustomed, to this insane mess of bland colored squares was to say the least awkward for a lot of long time users even for me and I am the one in this house who deals with the technical issues since I know how to build, install, and run PCs which have various operating systems including Windows, Linux and Mac.  The GUI alone is the most horrible mistake which alienates a loyal long held customer base.
Reply  |  Post Message  |  Messages List  |  Start a Board

I HATE Windows 8. I didn't like it when I had to upgrade to windows 7. A friend of mine has a NEW computer, that she bought on line, and it came with it, but without a word program unless she wanted to rent one by the month or the year. It reminds me of when we went from DOS to Windows, why go backwords? After reading some of the post, I now realize that it must have been developed for touchscreens, which her computer isn't. We're not computer people so I guess we'll have to find someone to fix it and put something on it that we can understand or scrap it and hopefully Apple isn't going in the same direction.
I hate this program of coming out with something new every 18 months. It is rediculous.
Sometimes all of this crap make me feel bad that I dedicated 20 years of my life to protecting this country so some pinhead somewhere could set around thinking up ways to phuck it up.
Reply  |  Post Message  |  Messages List  |  Start a Board

"so I quickly re-installed iOBIT's StartMenu8"
And, that's the point. Windows 8.x is a platform upon which anyone can apply customizations to it whether they are native or third party. To completely diss the OS when there are plenty of free/cheap solutions to alleviate any perceived shortcomings does not make any sense.
Reply  |  Post Message  |  Messages List  |  Start a Board

I couldn't really tell any difference. The new start button is much worse than no start menu at all, so I quickly re-installed iOBIT's StartMenu8. Remember the 'Windows 7 was my idea' slogan? I swear Microsoft still isn't listening to its customers, and they've been screaming for a year.
Reply  |  Post Message  |  Messages List  |  Start a Board

Microsoft has gotten a lot of things right with Windows 8.1 and it seems they are headed in the right direction....
http://www.aress.com/Software_...
Reply  |  Post Message  |  Messages List  |  Start a Board

Definitely one of the big issues. More than 100 million people are using Windows 8, but a lot of them took advantage of discounted upgrades and simply installed Win 8 on aging, non-touch PCs. Win 8.1's boot-to-desktop mode helps these customers, as does the ability to disable hot corners. Public response to the new Start button is still unknown, though I've found the right-click option is more useful than some have said.

Will it be enough to convince "traditional" PC customers give the Windows 8.1 desktop a chance? And if they do, will they spend any time in the Modern UI? Or will they enable boot-to-desktop and banish the Live Tiles from their workflow? Windows 8.1 is a definite improvement, but it faces a barrage of questions and doubts.
Reply  |  Post Message  |  Messages List  |  Start a Board

After installing the upgrade, I realize even more that Microsoft is trying to cover the tablet base as well as the traditional non-touch Windows "7" base. The problem is, I believe, that you can't really meld both into one OS. Maybe when the table market, i.e. Windows RT, etc matures, then this confusion may go away. Until then, people that are traditional users of PC's/laptops are going to continue to be frustrated.
Reply  |  Post Message  |  Messages List  |  Start a Board
Editors' Choice
Hot Topics