An advocacy organization finds gaps in corporate support for freedom of expression and data protection.

The world's leading Internet and telecommunications companies are failing to adequately protect freedom of expression and privacy, according to Ranking Digital Rights.

The Washington, D.C.-based non-profit on Wednesday released its inaugural Corporate Accountability Index, which presents an analysis of corporate commitments, policies, and practices with regard to international human rights frameworks, such as the United Nations Guiding Principles on Business and Human Rights and the Global Network Initiative.

Its findings, based on 31 indicators, show there's considerable room for improvement. 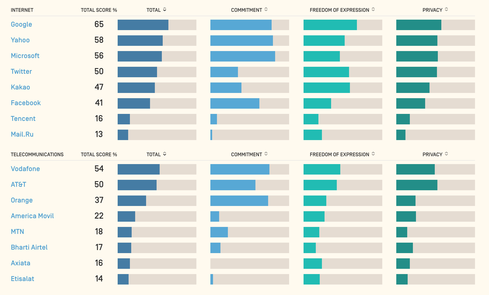 "When we put the rankings in perspective, it's clear there are no winners," said Rebecca MacKinnon, director of Ranking Digital Rights, in a statement. "Our hope is that the Index will lead to greater corporate transparency, which can empower users to make more informed decisions about how they use technology."

Mail.ru, the Russian email service, scored 13%, the lowest among the companies evaluated. Ranking Digital Rights attributes part of its low rating to Russian law, which requires that companies implement the government's SORM surveillance system to provide authorities with access to customer data. The legal environment in Russia, the group suggested, fails to provide businesses with incentives to recognize the rights of Internet users.

Laws play a significant part in how companies fared in the ranking. In its evaluation of Google, Ranking Digital Rights noted that "aspects of U.S. law and the company's business model would need to change in order for Google to achieve a perfect score."

Yet, if much of the legislation making headlines in recent months is adopted, it could further reduce companies' scores. For example, a new draft of the United Kingdom's Investigatory Powers Act would require that Internet service providers store the Internet activities of subscribers for a year, and produce that data on demand, without a warrant. In the United States, the Cybersecurity Information Sharing Act (CISA), decried by privacy groups but passed by the Senate and awaiting a vote in the House, would require companies to share data with the government, and would immunize them for doing so. And France is close to passing an Internet communications bill that would allow mass surveillance.

In order for companies to respect speech and privacy rights, governments first must allow such rights to exist.

Thomas Claburn has been writing about business and technology since 1996, for publications such as New Architect, PC Computing, InformationWeek, Salon, Wired, and Ziff Davis Smart Business. Before that, he worked in film and television, having earned a not particularly useful ... View Full Bio
We welcome your comments on this topic on our social media channels, or [contact us directly] with questions about the site.
Comment  |
Email This  |
Print  |
RSS
More Insights
Webcasts
People Are The Most Important Part of Autonomous SOC
Ten Keys to Better Security Data Analysis
More Webcasts
White Papers
Sunburst: Impact and Timeline
The Hidden Security Risks of APIs: How to Protect Your Brand, Business, and Data
More White Papers
Reports
Key Strategies for Managing New Risks in Cybersecurity
Are Unprotected Cloud Databases Leaking Your Data?
More Reports
Copyright © 2021 UBM Electronics, A UBM company, All rights reserved. Privacy Policy | Terms of Service