50%
Tweet
Ellis Burgoyne, who started his USPS career 32 years ago as a letter carrier, was promoted as part of an overhaul of the agency's executive team. 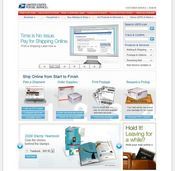 (click image for larger view)
Best Government Websites
The U.S. Postal Service has named a former letter carrier to the CIO position in a series of executive appointments aimed at making the agency a more agile, customer-oriented organization.

Ellis Burgoyne, a 32-year USPS veteran who most recently served as area VP, will now oversee all systems and data management for the organization.

In his new role, he's expected to rapidly develop new technology to help the USPS better serve its customers through the Web and other network-based applications and services, according to the USPS.

Burgoyne was named alongside five others as part of a new executive team tasked with working directly with postmaster general Patrick Donahue to strengthen the organization's business-to-customer channel, as well as to improve the overall experience for USPS customers.

The new team also is expected to help the USPS grow its package business and become a "leaner, faster, smarter organization," according to a statement.

The USPS long has been criticized for its lack of customer service, and has been losing business to private shipping companies for several years. Donahue hopes that an executive makeover and more savvy use of technology will raise the organization's profile with customers and help it gain ground it's lost against the competition.

The changes come as the organization is in the middle of the winter holiday shipping season, its busiest time of the year. The organization ships an estimated 20 billion items of mail between the end of November and Christmas Day.

Burgoyne began his career with the post office in 1978 as a letter carrier and worked his way up the ranks through various management positions.

Immediately prior to his new role as CIO, Burgoyne was VP of the southwest area for the USPS, overseeing operations -- including mail processing and distribution as well as customer service and administrative operations -- for the five-state region of Arkansas, Oklahoma, Louisiana, New Mexico, and Texas.