0%
Tweet
Let me tell you a very personal story about why Ada Lovelace matters, and how we can use this day to inspire girls and young women to enter the fields of science, technology, engineering, and mathematics.

Happy Ada Lovelace Day! You didn’t know it was Ada Lovelace Day? Not surprising, since this is only the 6th year we're celebrating a holiday invented by one hopeful woman, Suw Charman-Anderson. Ada Lovelace Day is designed to celebrate women in technology, engineering, science, and mathematics (STEM).

Let me tell you a very personal story about why Lovelace matters. My daughter goes to a school which hosts "Historical Halloween." Students are allowed to come to school in a costume for Halloween. They have to pick a historical figure to be, and write a report on that person. Here's the thing: There can be no duplicates. Only one child gets his or her pick in the event that more than one student wants to dress up as the same person.

On the day that the 4th graders found out who they could dress up as for Halloween, my daughter discovered her best friend crying in the restroom because she couldn't be Ada Lovelace. How cool is it that there are at least two 4th grade girls in my daughter's school -- among a total of about 80 4th graders -- who are not only aware of Lovelace, but were vying for a chance to pretend they were Lovelace for a day. One child ended up thrilled, the other heartbroken.

Little girls, at least these two little girls, are starving for technology role models. They're dying to learn everything they can about the girls and women who crashed through barriers in science and technology. Ada Lovelace Day matters to little girls, even the ones who have never heard of Lovelace or been told that she has a special day. 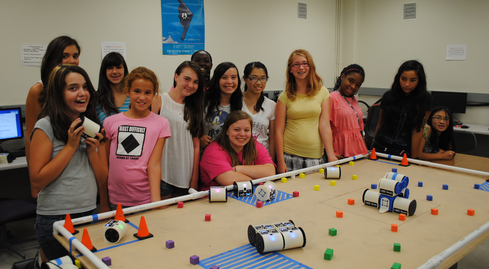 Girls learn about robots at UC Davis Center for Integrated Computing and STEM Education. We need hundreds of programs like this.

[One possible reason women aren't going into IT? The persistent geek image. Read Want More Women in IT? Drop the Geek.]

Not only are girls not going into technology, but the number of available role models is shrinking. The fewer women in IT today, the less likely we will add more names to a list that includes Lovelace, Grace Hopper, and Erna Schneider Hoover.

Lovelace is often called the first computer programmer. She was the daughter of the poet Lord Byron and, as such, had special access to science and math education that wasn't readily available to many women of the 19th century. (Her father died shortly after she was born.) She worked with Charles Babbage on his mechanical computer, the Analytical Engine. She wrote algorithms for the Analytical Engine, and is credited as the first programmer. She's also widely credited with having a vision of the computer as more than a calculator.

The best way to celebrate Ada Lovelace Day is to encourage a young woman you know to get into STEM. Beyond that, there are yearly events you can participate in. Here at InformationWeek and our sister sites we want to encourage women in IT. We have done things such as identifying which enterprises are best for women in IT,  highlighting  resources for women in tech, and offering lessons for women in leadership on our IT Life Radio show.

Happy Ada Lovelace Day. I hope you take some time to inspire a girl or young woman to pursue a career in STEM today.

Please, use the comments section below to tell us about your heroes in IT, and share your ideas on what we can do to inspire today's girls to grow up to be our next generation of women in IT.

David has been writing on business and technology for over 10 years and was most recently Managing Editor at Enterpriseefficiency.com. Before that he was an Assistant Editor at MIT Sloan Management Review, where he covered a wide range of business topics including IT, ... View Full Bio
We welcome your comments on this topic on our social media channels, or [contact us directly] with questions about the site.
Comment  |
Email This  |
Print  |
RSS
More Insights
Webcasts
Maximizing Database Performance to Improve Customer Experience
[Dark Reading Virtual Event] Your Crash Course on Cyber Attackers
More Webcasts
White Papers
Cloud Threat Report: Spring 2020
The Best Free Vulnerability Management Tools
More White Papers
Reports
Special Report: Understanding Your Cyber Attackers
Remote Network Management: The Enterprise at Home
More Reports

I read a biography of her called Ada's Algorithm recently. That's how I discovered that it took until just a couple of year's ago for a full version of Babbage's engine to be built.  It was completed in March 2008 is on display at the Computer History Museum in Mountain View, California
Reply  |  Post Message  |  Messages List  |  Start a Board

@Ariella that book is on my reading list! It's amazing it took so long to build the machine.

I am a big fan of Limor Fried, founder of Adafruit Industries. She was the first female engineer to grace the cover of Wired Magazine a few years ago.
Reply  |  Post Message  |  Messages List  |  Start a Board

@Michell that is quite an accomplishment! I'd say the book is good, though it really only covers the algorithm of the title briefly in the middle. A significant portion is devoted to the scandalous affairs of Byron and how they caused a rift between him and Ada's mother. Ada was cut off from her father, though she did request that she be buried next to him -- a kind of dig at her mother who outlived her. Ada was only 36 when she died, likely of uterine cancer.
Reply  |  Post Message  |  Messages List  |  Start a Board

Sorry the  student couldn't be Ada, but she could always be Grace Murray Hopper. And the uniform might be easier to get.

And I know there are others, but there names aren't known to me, sadly.

>  my daughter discovered her best friend crying in the restroom because she couldn't be Ada Lovelace. How cool is it that there are at least two 4th grade girls in my daughter's school -- among a total of about 80 4th graders -- who are not only aware of Lovelace,
Reply  |  Post Message  |  Messages List  |  Start a Board

@dave -- Looking forward to more coverage of women in computing/technology

in the meantime, here's something I stumbled upon the other day -- who knew?

The 2015 Grace Hopper Celebration of Women in Computing is being held October 14 – 16 in Houston, Texas. Learn more at gracehopper.org

Started in 1994, GHC is now the world's largest gathering of women technologists. In 2013, GHC hosted over 4,750 attendees from 53 countries including 1,900 students from over 400 academic institutions and 2,850 professionals from industry, government and academia. GHC 2014 sold out in record time, even with an increase in capacity to accommodate over 8,000 attendees. The conference features keynotes by prominent women in technology, career workshops, and technical tracks from leading researchers and the best of ACM SIGSOFT & SIGGRAPH.
Reply  |  Post Message  |  Messages List  |  Start a Board

Oh, very cool. I'm sorry I missed this. Thanks for sharing it. I'll try to make sure I feature it next year.
Reply  |  Post Message  |  Messages List  |  Start a Board
Editors' Choice
Hot Topics

More Informa Tech Live Events
SecDevOps: Tying Security to Your Application Development ProcessesUsing Artificial Intelligence, Deep Learning and Machine Learning for Cyber DefenseThe Best Ways to Stop Malware and Ransomware That No One Else Will Tell You