Autonomous and connected cars were spotlighted at this year's Mobile World Congress. With 44 million of these vehicles expected to hit the road by 2030, tech companies such as Nokia Networks and Qualcomm are joining car manufacturers to roll out state-of-the-art features.

Qualcomm's technology partnership with the Mercedes Formula 1 team aims at testing the chipmaker's new technologies for autonomous cars, while at the same time making F1 race cars even faster. "One of the first technologies that we are testing is a high-speed wireless access to get important data off the vehicle quickly so the team can evaluate data in real-time," said Aberle. 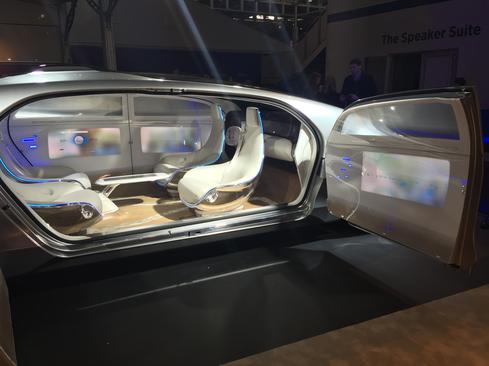 The Mercedes F 015 offers an executive-lounge-like interior where people can relax, work, or just enjoy the trip. It also includes eye-tracking gesture and touch-controlled screens on both sides to allow interaction with the vehicle, or email and Internet access.

Since driverless technologies are invading the F1 space, some may wonder if Hamilton might be out of a job soon enough. Hamilton said no.

"I don't think they are going to replace us in the racing cars, which is a good thing, but in the road car? Yes, I think it's exciting," said Hamilton, adding he's not a huge fan of driving on the road. "I can't stand traffic."

AT&T has partnered with several automakers to add next-generation technology to their connected services. This includes the Audi R8 V10 Plus 2017 with 4G LTE connectivity, WiFi capability, and Google Earth for the navigation system. This vehicle is already available in the US and Canada.

In addition, AT&T and Porsche have entered a multi-year connected car agreement.

In Europe, the Opel 2016 4G LTE system is already available, and includes eCall, auto-crash detectors, vehicle diagnosis, and voice activation to get directions which will appear on the screen panel with a number of different language options.

Munich-based BMW is preparing its 5 Series self-driving prototype. However, the German automaker's next generation of smart vehicles will not appear until 2020. The Jaguar F Pace is also joining the connected cars race by sporting Intel under the hood.

With so much on the horizon, this year's MWC could only really offer a glimpse of what's to come with connected cars. Fasten your seat belts and get ready for a one-of-a-kind ride toward the near future of driverless cars.

Susan Fourtané is a Science & Technology journalist, writer, and philosopher with a life-long interest in science and technology -- and all things interesting. She has been a technology journalist for nearly 10 years writing and reporting for global print and online ... View Full Bio
We welcome your comments on this topic on our social media channels, or [contact us directly] with questions about the site.

Of course, I understand. If we have a quick look at the history of humanity we can see that since the very beginning there have been such people. This, innevitably, if something that won't change any time soon.

We just have to accept that with all the great things that new technologies will bring the same things will also be used for bad things by those nasty people.

I hope I could give you a more positive forecast, though. We'll see what happens.

Broadway, exactly. Most people have a tendency to resist new technologies due to a fear of the unknown. It takes time, but at the end it will be as you said. Do you personally would have a driverless car if you had to the chance now? /Susan
Reply  |  Post Message  |  Messages List  |  Start a Board

tjgkg, sometimes I wonder if it is not us who come up with all these ideas and hackers just find them ready to elaborate, improve, and put them into practice. What do you think of this, do you think it could be possible? Terrorists already deliberately crash and planes. The only difference would be that none of them has to die in the process. Yes, there are some really bad people out there. But progress and technology can't be stopped because of them. It is also true that the good guys are doing everything that is in their power in the security space. /Susan
Reply  |  Post Message  |  Messages List  |  Start a Board

Broadway, that's a great question about what the right age for sending kids to school in an autonomous car would be. Do you think when self-driving cars become more common people will leave fear behind? /Susan
Reply  |  Post Message  |  Messages List  |  Start a Board

Impact, How old is your young child? Yes, for the elderly, disabled, and teens will be great, as well as for those who don't like driving, or can't drive for some reason, but also for children who go to school. /Susan
Reply  |  Post Message  |  Messages List  |  Start a Board

Charlie, I don't know particularly in the Bay area, but according to car manufacturers, companies responsible for the connectivity in the vehicles, and research studies traffic will see improvements and fatalities on the road will decrease. /Susan
Reply  |  Post Message  |  Messages List  |  Start a Board

Susan I don't know that I would put my young child in a self driving car on their own but I do think it would be great for the elderly disabled or teenagers that need a ride to the mall!
Reply  |  Post Message  |  Messages List  |  Start a Board

I think driverless cars will worsen traffic snarl-ups in the Bay Area because cars must take their turns and proceed through narrow corridors at such frequent intervals that the software will balk and freeze up at the close proximity to other cars. Or it may be driver-driven cars will have an advantage in highly congested situations that slows the progress of cautiously driven, driverless cars.
Reply  |  Post Message  |  Messages List  |  Start a Board

Yes, people who can't drive are going to really enjoy these cars. They will change their life. Also, parents will have more free time since the car will drive the kids to school, pick them up, and do other things like sending things to relatives, friends, etc.

That would be catastrophic, indeed! This has been a thought-provoking conversation. Thank you. As I mentioned earlier, according to the conversations I have had with, for example, researchers and experts on 5G from Nokia Networks and others, providing an encrypted security for the networks is top on the 5G agenda.

But as we know, things can happen. This technology is great and its many possible applications will improve the quality of living in more than one way. Yet, we need to remember that there are evil people out there.

As for the smartphones and Apple, yes, I agree. The Apple vs FBI case shows that the technology exists. The fact that companies can choose how to use it, or don't use it is a different story.

Apple's security has always been reliable. Many people critize the company because of the price of the products. But when you buy an Apple product you get quality and in cases like this, you really understand how much you can trust the company. As an Apple user, I am very pleased. :)