0%
Tweet
We're celebrating the new Star Wars digital download, but there are definitely some things missing from the extras that come with the package.

I have a shocking confession to make: For at least a decade I have had no way to watch Star Wars. I still own the original Star Wars trilogy (not the George Lucas crapfest revision) on VHS. But I have no VCR. That's why I'm so excited for the new digital download of Star Wars Episodes IV-VI. (Oh, and the other three came out, too.) I skipped the DVD and the Blu-Ray, and now it is time to upgrade my Star Wars options.

That said, I'm a little disappointed in the extras that come with the digital download, which is available today on Amazon and iTunes (among others). Sure, the conversations with original artists on the film and the lost cast-member interviews are cool. But the digital nature of this download means we should be able to really add some stuff we've never seen in a release before. We're still acting as thought digital downloads are just DVDs without the disk. So, we've decided to examine some things we'd have much rather had for this release.

1. Make Han Shoot First. This is a must. If I can't choose between the original and the revision, what's the point of a digital release? It isn't like the actual data on the release costs that much. Heck, I wouldn't even need the whole original movie. Just give me the option to fix this. Just let me push a button that makes Han shoot first, and I'll happily plunk down an extra $10.

2. Dirty Bloopers. Every movie release has bloopers (though this one doesn’t). The bloopers are almost always family friendly. But you know out there somewhere is a blooper of Anthony Daniels (C-3P0) saying in perfect 'droid voice something like, "It is *bleeping* hot in this thing." Or James Earl Jones saying, "Luke, I'm your *bleeping* father." Or best yet, Jar Jar Binks saying, "Me-za want a *bleeping bleep*." Fill in your own bleeps. Seriously, you know they are out there, and they probably only play them at cast reunion parties or holiday parties at Industrial Light and Magic. This is the stuff we really want. It would be like getting to hear Elmo swear on Sesame Street. You know it happens.

3. New Commentary. I demand that Peter Mayhew, the actor who played Chewbacca, do a new commentary for the movie. And I demand he does it in character. It would sound like this:

Tell me you wouldn't watch that (especially with subtitles) repeatedly.

4. A Special Action Figure. Remember the good old days when the most important things in the world were your Star Wars action figures? Because every kid had the same action figures, my mother devised a little code. All the mothers painted the heel of each action figure with a different color of nail polish for each kid. At the end of the day, all we did was flip over Luke or Han and see which one belong to whom. Way to ruin the value, mom! Anyway, I know this is a digital download, but wouldn't you like to get an action figure in the mail? Wouldn't you secretly get a little thrill? Buying one (or playing with your old ones) means you did it on purpose and you're crazy. Having one you just happened to get when you bought the movie is very grown-up and mature. Right? 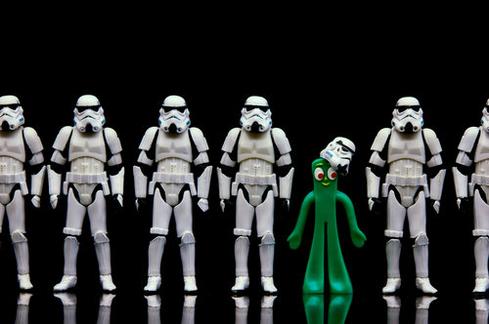 5. The Ill-Fated Christmas Special. It is time to stop running from this and start embracing a more innocent time. By all measures, the Star Wars Christmas special is one of the worst things ever made. At this point, its value is in imagining it was once made and laughing at it. Nonetheless, we all deserve to see that Chewbacca has a child named Lumpy and a father named Itchy. And we all deserve to see Princess Leia lead Wookiees in song. At the very least, they could have packaged it with this very special ending found on YouTube.

Let's face it. This thing is $90 for all six movies. That's $30 per good movie, and then they throw in the prequels for free. If I'm paying $30 per movie, I want some swag. I want some stuff I've never seen before. Is that too much to ask to have to admit you own a copy of Phantom Menace?

What do you want? Are you even going to buy the new digital release? You have to at least have them all to watch them before Episode VII comes out this year, right? Tell me all about it in the comments section below.

David has been writing on business and technology for over 10 years and was most recently Managing Editor at Enterpriseefficiency.com. Before that he was an Assistant Editor at MIT Sloan Management Review, where he covered a wide range of business topics including IT, ... View Full Bio
We welcome your comments on this topic on our social media channels, or [contact us directly] with questions about the site.
Comment  |
Email This  |
Print  |
RSS
More Insights
Webcasts
Effective Cyber Risk Assessment and Measurement
Edge Computing: An IT Platform for the New Enterprise
More Webcasts
White Papers
[Forrester Research] The State of Data Security & Privacy
2020 Gartner Market Guide for Network Detection & Response
More White Papers
Reports
Special Report: Understanding Your Cyber Attackers
The State of IT Operations and Cybersecurity Operations 2020
More Reports

For a digital download I not only want Han to shoot first, I want a toolkit to make little star wars mashups. After all, it's disney now, My kids would love to make Darth, Chewbacca, and ObiWan all sit down for tea, or do a dance number. It's digital, make it interactive.
Reply  |  Post Message  |  Messages List  |  Start a Board

New format, new release. This is how the entertainment industry makes money? You know it. It isn't as if Hollywood has the capability to release new stuff all the time – that wouldn't be compelling. They have to repackage all the old stuff and sell it again to people who have already bought it at least once.
Reply  |  Post Message  |  Messages List  |  Start a Board

To add to your comment, I strongly think this digital release of star wars if more of a ramp up to what's to come. Disney has an entire portfolio of start wars related products in the pipeline, with the very big one being the upcoming movie. Doing a digital release is marketing saying something more like "here's a treat of what's to come"

And as you mention, there are a lot of star wars spin off already coming out, like Disney's Star Wars Rebels TV series, which my son liked so much to asked for a star wars theme party (and me being a Geek Dad, I was more than happy to comply)
Reply  |  Post Message  |  Messages List  |  Start a Board

I don't know if this was a low-key announcement, or if it's just me, but I had no idea this was happening. I wonder what this portends for the future of the franchise with Disney having ownership (other than the new movie[s], of course.) This seems like a relatively quick move to get the all  the movies up on digital, in HD, with new content - although, that may explain the minor amount of new content. They're definitely not averse to maximizing the franchise's marketing muscle. Will we see more Star Wars spinoffs or crossovers, maybe through digital channels? People talk about seeing Star Wars  (and Marvel) characters in Kingdom Hearts - the crossover franchise from the makers of Final Fantasy that features Disney characters. Anything seems possible.

I will applaud your staunchness in waiting this long to pick up a 'definitive' version (don't they call every version that?) of Star Wars, Dave. I know people who have faithfully bought every version that comes out, gone to see the 3D re-releases, etc... and, let me tell you, this is not a case where you look back and say 'I'm glad I own it... I don't miss the money'. At least you know the digital release will be good for all-time and never become defunct like your VHS tapes. Personally, I can never get enough of documentary-type stuff about classic movies, but as cool as these sound (covering the miniature designs and such), I can't help but feel that some of what's on here is bound to be rehashes of what can be seen in the many available documentaries already. And, hey, I still think Episode III is alright (alright). So that's $22.50 per watchable movie. What a steal!
Reply  |  Post Message  |  Messages List  |  Start a Board
Editors' Choice
Hot Topics