SEARCH
A minimum of 3 characters are required to be typed in the search bar in order to perform a search.
Announcements
Alert
Got some free time? Grow your knowledge from the comfort of your computer for FREE!
Alert
Are you looking to stay on top of IT trends? Check out our FREE webinars and virtual events!
Alert
Planning for 2023? Be sure to check out our upcoming in-person events!
Report
How does your salary stack up? 2022 IT Salary Survey Results Revealed
PreviousNext
Mobile Devices
7 MIN READ
News 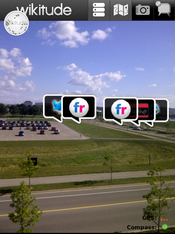 Mobilizy's Wikitude
Although RIM dubbs this a .0 release, some have complained that it's fairly minor to be considered so. I might agree, however, it consolidates several functions that were previously seen as outside-the-OS, but are now baked in. Updates to Twitter (integrated into your universal inbox and your notifications), Facebook (version 2.0 includes the ability to chat, and a richer user experience), BBM (version 6.0 is now a social platform for other BlackBerry applications) and Social Feeds (version 2.0 consolidates your feeds and provides some organizing mechanisms) should, in fact, all be included in a next OS rev, whether it's a major release or not. And so they are.

But RIM has also included BlackBerry Protect and BlackBerry Balance --two features which continue to set RIM apart from the pack when it comes to security and device management, whether you're a consumer simply buying a personal phone, or a consumer bringing a BlackBerry into the enterprise, or an enterprise assigning a BlackBerry to an employee. Protect (BlackBerry Protect video demo here) lets those not running BlackBerry Enterprise Server (BES) do a subset of the device management tasks for their phones, like remote wipe, remote lock and various functions for finding a lost device. Balance lets IT separate your work apps and data from personal functionality, like public social networks.

I didn't run any benchmarks, but I can tell you that the difference in browser speed is noticeable. Still, side-by-side comparisons between, say, a BlackBerry Torch running the latest version of OS 6 and the 9810 running BlackBerry 7 are biased by too many factors to draw hard conclusions--the network speed is faster, and variables like site caching, the fact that what's on a web page can change millisecond to millisecond based on things like ad calls, all impact performance. With those caveats, every single page I loaded simply seemed faster on the BlackBerry 7.

RIM's Bocking pointed out that RIM owns the entire phone stack, from the hardware to the browser, and thus the company has worked hard to make sure every piece of the equation is optimized. That includes Javascript performance and RIM's implementation of what it calls "liquid graphics," which is more about every piece of the OS and applications exploiting the power of the processor.

It shows--in loading apps, in loading web sites, in pinching and zooming (incredibly fluid now), in swiping and even restarting a device. I found nothing jerky or hesitant in these phones. If the previous touch and scroll experiences were built in taffy, these are slathered in butter.

RIM also claims that it has made the browser even more HTML5 compliant. I ran a few HTML5 experiments. First, I simply pointed the browser at html5test.com, and found that it scored a 277--the second highest of any mobile browser behind MeeGo; the browser in BlackBerry 6 OS was 269. iOS and Android fare much further back. (RIM's BlackBerry PlayBook tablet also does well, scoring a 274, tops among tablet browsers, according to the site's data.) I also used a test site that the Android browser doesn't get quite right, and the BlackBerry devices were perfect; as were the results on the Acid3 test. This is not to say that the browser is perfect, only that relatively speaking it performs tip top.

RIM also sent me a list of HTML5 apps to test. The Huffington Post BlackBerry app was functional, clean and useful--if you're into reading HuffPo. TuneIn is an excellent little radio app that worked like a champ. But I couldn't find all of the apps RIM pointed me to. PowWow, an app for creating and managing a social calendar with your BBM contacts was underwhelming. One of the apps was Guitar Chords, but I could only find The Guitar Studio, which seemed promising, but only let me down with its fairly rudimentary interface.

There were many unavailable applications--some associated with my BlackBerry ID (this is a method used to tie users, data and BlackBerry devices together, which can make it convenient to carry applications from an old device to a new one, for example). These did not carry over to the new BlackBerry phones, nor were they visible from App World--for example I couldn’t see Pandora, LinkedIn, Poynt, Fuze Meeting, Seesmic, Southwest Airlines, SugarSync and Trapster. But Evernote, BlackBerry Bridge and others were available and worked fine.

For a company that has struggled to convince consumers and developers it can win the app game, this is baffling.

Also on the downside, on a couple of occasions, I had to do a hard reboot of the devices in order to get applications to run properly--Digital Chocolate's 3D Roller Coaster Rush Jurassic 2, for instance, and PowWow. Running the 3D Roller Coaster game was an exercise in futility. On the Torch 9810, its appearance (or lack of) made it tedious to use, and then I kept getting errors concerning resetting the security timer. It would only run in portrait mode. I even uninstalled it and downloaded the app again; same result. Luckily, I'm not much of a game player. On the Torch 9850, the app worked better, but I still got the errors. A RIM spokesperson said Digital Chocolate may have loaded the wrong version.

RIM included Mobilizy's Wikitude with BlackBerry 7 OS. This is a so-called augmented reality application, which uses the device's built-in compass, camera, and 15 million points of interest in more than 175 countries to connect you to a variety of services based on what it knows, your location, and who you know, and often who you don't know. With it you can see who has posted YouTube videos on a spot on a map, or near you; find the nearest Starbucks, view Flickr photos, webcams, tweets.

I'm still really getting used to the idea of Wikitude, however. It is one of the many apps that are starting to tap into BBM 6, for example. You can see what BBM users are nearby and chat with them, or invite ones you don't know (they have to make themselves publicly visible) to be your BBM buddy (ugh!). It just feels a little creepy.

Docs To Go, the premium version, is now included. You can edit in Excel, PowerPoint and Word, and there's a native PDF viewer. All of it is integrated into a single app, and it's all free. Previously, you only got the standard version for free. There are some fairly major differences between the Docs To Go Standard and Premium Editions, and for those who do major document surgery on their BlackBerry phones, I'm sure this upgrade will be welcomed.

BlackBerry 7 also has voice-enabled universal search. Previously, you could just start typing in your search from anywhere, simply using the keyboard, and the OS would return results, including applications that might yield an appropriate result. Voice-enabled search does the same thing, only you click on the little microphone icon and speak. It worked great. Many of my searches, like for Peet's Coffee, yielded an option for Bing search, which used my location and showed me where the coffee shop was. I could have also selected Wikitude to help me find it. Bing is the BlackBerry's default search, but you can change that.

I did watch AT&T's U-vers Live TV (a repackaged MobiTV offering) and it generally worked well in limited testing over the HSPA+ network. The video quality wasn't top notch, but I didn't expect it to be. On demand offerings were much better than live TV. I also tested BlackBerry Bridge on all three phones, and they worked with the BlackBerry PlayBook tablet flawlessly.