The bundle will include the Xbox 360 250GB video-game console with built-in 802.11n Wi-Fi, the Kinect motion sensor and the Kinect Adventures game.
Antone Gonsalves
Contributor
September 09, 2010 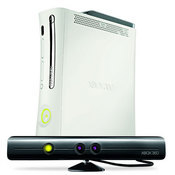 (click image for larger view)
Microsoft Xbox Kinect Bundle
Microsoft is enticing gamers with a $400 entertainment bundle that will include the Xbox 360 250GB video-game console, the Kinect motion sensor and one game. The bundled Kinect-ready Xbox is the slimmer, glossy black console introduced in June at the E3 game conference. The console, which includes built-in 802.11n Wi-Fi, costs $300 by itself.

Microsoft said Wednesday it plans to release the bundle Nov. 4 with the "Kinect Adventures" game. The bundle will hit store shelves the same day the Kinect is released as a standalone product for $150. Microsoft also plans to release 15 Kinect games for $49 each.

The latest Xbox-Kinect bundle is the second announced by Microsoft. In July, the company said it would offer the Xbox 360 4GB model, the Kinect hands-free sensor and "Kinect Adventures" for 300. The Xbox 360 4GB console, which was released Aug. 3, costs $200 alone.

Microsoft plans to debut the Kinect in Japan next week at the Tokyo Game Show; the scheduled for release in Japan Nov. 20. The Kinect and Xbox 360 250 GB bundle is available for preorder Wednesday through Amazon.com.

In launching the Kinect, Microsoft joins Sony in taking on the motion-sensing technology that has driven sales of the Nintendo Wii since its release in November 2006. Sony plans to release its motion-sensing controller for the PlayStation 3 in mid-September.

However, Microsoft hopes to beat the competition by offering a motion-sensing system that doesn't require users to hold a controller in their hand. Instead, the Kinect features a camera, audio sensors and motion-sensing technology that tracks 48 points of movement on the human body. Players can control on-screen action simply through physical gestures and verbal commands. The sensor bar is designed to plug directly into the Xbox 360 console.

Analysts expect the Kinect to be one of the hottest selling consumer electronics during the holiday shopping season.

Xbox Kinect Could Be Microsoft's iPad