Our InformationWeek 2013 Virtualization Management Survey shows automated service delivery is the future -- unless you want to find yourself managing cloud providers.

As we enter 2013, the technology foundation of our businesses is changing dramatically as every layer of the network and service delivery stack can now be abstracted. The final holdout of genuinely "hard" hardware was the network, but even that's going virtual. When we asked about software-defined networks in the InformationWeek 2013 Virtualization Management Survey, we found more interest in SDNs than in our SDN-specific survey just a few months earlier.

Higher up the stack, 42% of the 320 business technology respondents to our virtualization survey say their companies use multiple hypervisors, up from 36% in August 2011, and 11 of the 13 hypervisors we asked about are in use by more than 10% of respondents, compared with eight hypervisors two years ago. In this year's InformationWeek Global CIO Survey, 92% of respondents say they plan to increase their use of server virtualization, even ahead of expanding business intelligence (85%) and improving information security (84%). In our InformationWeek 2012 IT Spending Priorities Survey, improving security, increasing server virtualization, and upgrading the network and storage infrastructures came in atop a list of 16 projects competing for budgets.

However, the end goal of all of this virtualization--flexible, service-oriented IT that can respond quickly to business needs--is still a precarious proposition because it requires extensive automation and orchestration. That's a big worry for IT teams faced with coaxing performance out of highly virtualized, highly fragmented stacks using management technologies inadequate to the task.

In fact, confidence in next-generation virtualization technologies is low among many IT professionals we work with, even as use rises. Why? For one thing, the hypervisor wars aren't over--they're escalating. While VMware remains king of the hill in terms of functionality and market share, Microsoft's Hyper-V continues to gain momentum, with nearly one-third of survey respondents citing some level of use. Improvements in Windows Server 2012 will keep that growth going. Citrix and Oracle are holding their own, and we're only talking server and desktop virtualization here. Never mind the number of hypervisors from vendors competing in virtualized storage, network, I/O, and applications.
Research: 2013 Virtualization Management Survey

Get the full report on our 2013 Virtualization Management Survey free with registration.

This report includes 34 pages of action-oriented analysis, packed with 28 charts. What you'll find:
Get This And All Our Reports

This isn't all bad for IT. Competition has driven core virtualization technology costs down by about 75% since the debut of server virtualization in the early 2000s. Even storage and application virtualization have started shedding their price premiums. A proliferation of new products and vendors also fosters innovation.

But hypervisor fragmentation has a killer downside: a lack of standardization that makes integrating dissimilar silos--an absolute requirement if we want to get to automated service delivery--nearly impossible. A main goal of automation is self-service, empowering business users to provision the IT assets needed for a given project. That goes beyond just server cycles; if the whole stack isn't working in unison, you don't have efficient resource use, self-healing, improved application availability, better power management, preplanned responses to contingency scenarios--all the stuff that makes automation worth the cost and effort.

One often overlooked issue is that virtualization technology has changed so quickly that only the largest and most progressive companies have the skill sets to maintain it. Respondents to our survey cite a moderate to high degree of difficulty in training or sourcing the professionals necessary to solidify the stack. The traditional IT team structure is changing, too, as we deal with networks inside servers, applications rolled from virtualization management platforms, and server teams that provision their own storage. 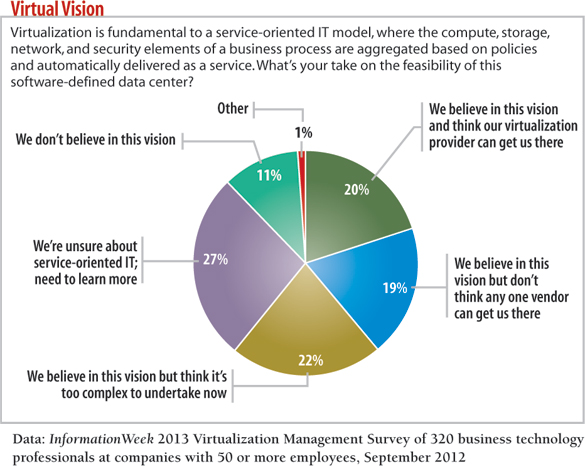 Comment  |
Email This  |
Print  |
RSS
More Insights
Webcasts
People Are The Most Important Part of Autonomous SOC
Nip Ransomware in the FUD: Detecting Attacks Pre-Encryption
More Webcasts
White Papers
Why Add Security to Your Skill Set and How to Do It
How Hyatt Eliminated Bot Attacks Without Impacting their User Experience
More White Papers
Reports
Intelligent Outcomes Are Key to Business Resilience
Enabling Enterprise Resiliency Through Cyberthreat Detection
More Reports

CRM Trends 2021: How the Pandemic Altered Customer Behavior Forever Jessica Davis, Senior Editor, Enterprise Apps,  2/18/2021
White Papers
Why Add Security to Your Skill Set and How to Do It
MontanaPBS Shifts to Agile Broadcasting with Help from Raritan KVM Solutions
Don't Let the Past Obstruct Your Zero-Trust Future
Data Orchestration: Critical Elements for Data Strategy and Infrastructure
Balancing Hybrid Storage as Part of a Hybrid Cloud Data Management Strategy