At its developer conference in San Francisco, Calif., on Wednesday, Box CEO Aaron Levie sat down for a conversation with Google executive chairman Eric Schmidt.

The two companies could be characterized as competitors: Both sell cloud-based storage to business customers. But you couldn't tell from the demeanor of the two men, who clearly enjoyed the repartee.

Much of the discussion was only obliquely related to Box. Levie, who has the wit and timing for a career in late night television if his Box gig doesn't work out, began by asking whether Schmidt arrived in a self-driving car. To no one's surprise, he hadn't.

"A hundred years from now people are going to laugh when they see a movie where people get in a car and drive it," Schmidt insisted.

Schmidt went on to thank Levie and his company for being a Google Docs partner, underscoring that there's as much common ground between the two companies as there is competition. By the end of the chat and the keynote presentation that followed, it became clear that Box isn't really in the cloud storage business anymore. 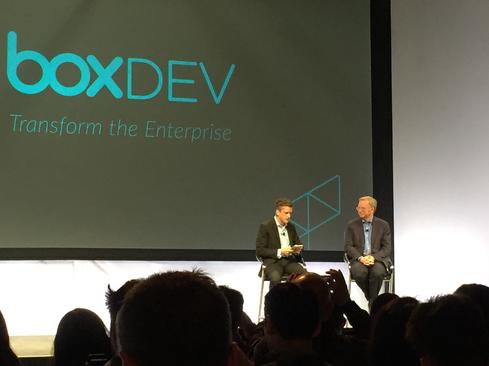 Box has been offering cloud-based storage to businesses since the company was founded in 2005. It's an idea that has finally won mainstream acceptance. But in so doing, it has attracted tech industry giants such as Amazon, Google, and Microsoft, which see storage as the basis for a long and potentially lucrative customer relationship.

It's been a costly gambit for Box, which boasts 45,000 business customers, including half of the Fortune 500, and 35 million registered users, up 10 million since its prospectus last year. During its 2015 fiscal year, it lost $167 million, with revenue of $216 million. Google last September said it had 240 million active users of Google Drive, and more than 5 million Google for Work business customers.

Last year, Box recast itself as a platform, eager to get out of the race to the bottom selling storage. This year, Box refined its vision and invited developers to see corporate content through its eyes.

Box announced the upcoming release of Box Developer Edition, which provides an independent, developer-owned Box instance upon which to build enterprise apps. Box Developer Edition redefines the relationship between Box and its customers by elevating the developer to the level of a partner. The developing company, rather than Box, becomes the steward of the users and data for its app. It controls how the users and data get managed. In turn, it must pay for Box API usage. If the developer created its app on behalf of a client, it can bill the client; if it created its app for usage by its own employees, it can absorb the cost. Regardless, Box aims to make money from selling services — API access — rather than undifferentiated storage.

"We've built full text search, content encryption, advanced permissions, secure collaboration, and compliance — all the capabilities that you as a developer would have to build yourself when working with commodity cloud storage," explained Heidi Williams, senior director of platform engineering at Box, in a blog post.

The company's focus on "content" rather than "data" or "storage" makes sense: Content is something companies prize, protect, and pay for. Among businesses at least, it's not a commodity.

To encourage partners to commit to its platform, and to provide those partners with enhanced service, Box launched the Box Platform Partner program. It also launched the Box Assured Apps program to certify the apps as enterprise-ready.

Finally, there's a Box rewards program of a sort: Two Silicon Valley venture capital firms, Bessemer Venture Partners and Emergence Capital, plan to invest as much as $20 million in enterprise software companies that build on the Box platform.

"The mission at Box is to transform the way people and organiztions work," said Levie, who has managed to transform Box along the way.

Interop Las Vegas, taking place April 27-May 1 at Mandalay Bay Resort, is the leading independent technology conference and expo series dedicated to providing technology professionals the unbiased information they need to thrive as new technologies transform the enterprise. IT pros come to Interop to see the future of technology, the outlook for IT, and the possibilities of what it means to be in IT.

Thomas Claburn has been writing about business and technology since 1996, for publications such as New Architect, PC Computing, InformationWeek, Salon, Wired, and Ziff Davis Smart Business. Before that, he worked in film and television, having earned a not particularly useful ... View Full Bio
We welcome your comments on this topic on our social media channels, or [contact us directly] with questions about the site.
Comment  |
Email This  |
Print  |
RSS
More Insights
Webcasts
What We Can Learn from Sports Analytics
How Elite Analyst Teams are Transforming Security with Cyber Reconnaissance
More Webcasts
White Papers
How to Prioritize Risk Across the Cyberattack Surface
Presenting Your Cloud Security Strategy to the Board
More White Papers
Reports
How Data Breaches Affect the Enterprise (2020)
Special Report: Edge Computing: An IT Platform for the New Enterprise
More Reports
Copyright © 2021 UBM Electronics, A UBM company, All rights reserved. Privacy Policy | Terms of Service