At this week's Google I/O annual developer conference the company revealed dramatic products that will push the boundaries of technology further into what was previously the realm of science fiction.

Google I/O is now over in Mountain View, but the winds of change fanned by Google this week accelerate to gale force and knock down long-standing behaviors. The search giant has been working on a slew of software advancements that will help transform how we interact with technology.

Google's vision of the future is a compelling one, and I, for one, can't wait to see it become fully realized.

[Read how Chrome is killing off Flash.]

Picking the most significant announcements from Google this week is no easy task, but here are the five things we deemed most important.

Google Now has been a helpful virtual assistant for several years now, but the renamed Google Assistant will take things to the next level. On stage, Google demonstrated how its artificial intelligence and Google bot can not only respond to natural language requests, but also participate in ongoing dialogues with multipart questions and answers.

Google is prepared to package Google Assistant into a device for the home called Google Home. It will compete directly with the Amazon Echo and its Alexa artificial intelligence. While Alexa's capabilities grow every week, Google Assistant is far more capable of interacting with people. Google Home could be a game-changer for in-home AI. Think about how Captain Jean-Luc Picard and crew interacted with the Enterprise's onboard computer. Google Home isn't about to conjure up a cup of "Earl Grey, hot," but it will be able to look up movie times, suggest alternatives, and even buy the movie tickets.

Daydream may sound whimsical, but nothing could be further from the truth. Daydream represents Google's head-first tumble into the world of virtual reality. Sure, Google Cardboard has been around for a couple of years, but Daydream's aspirations are far grander.

The platform, based on Android N, will help guide phone makers, VR headset makers, and app developers to create compelling content that is more widely available to people around the world. With a core set of specs and ideas around how all the components should work together, Daydream will be a stepping-off point for virtual reality on a larger scale than anything we've seen before.

Google delivered some notable updates to its core mobile platform during I/O, though it might be easy to dismiss some of them. Android N -- which has not yet been formally named -- focuses on improving productivity, performance, and security. Google handled the productivity aspect via split-screen multitasking, the performance aspect by adding the Vulkan API, and security by adding file-level encryption and automatic security downloads. 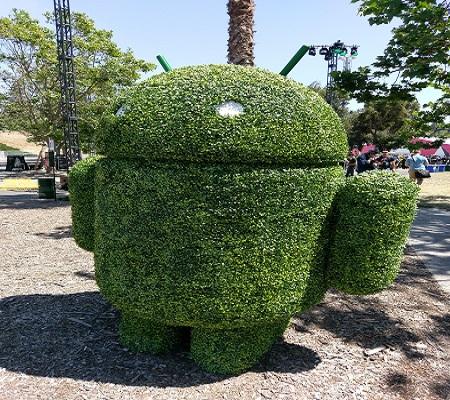 Google didn't stop there. Android N is the central brain behind many different applications and services from Google. For example, the changes to Android Wear 2.0 are rooted in Android N, as are the new features headed to Android Auto and Daydream. Android N may not include highly-visible features for end-users, but the under-the-hood architectural changes will impact everything Google's users do.

Google was sure to remind us that apps are so important.

In fact, apps are so important that Google decided it was past time to bring real apps to its ChromeOS. The company will soon let Chromebook owners use Android apps on their laptops. This is a pretty big deal, and something people have requested for a long time. Google says Android apps -- all 1.5 million of them in the Google Play Store -- will be able to run in separate windows on Chromebooks. Google believes ChromeOS and its selection of Chromebooks can handle apps from the simplest of calculators to the most challenging multiplayer games.

Google also revealed a way to improve the app experience on Android phones. The idea behind Android Instant Apps is to let people view content that's inside other apps, even if they don't have the app installed on their phones. Instant Apps will install just the portions of the app needed to access the shared content (think videos, GIFs, or other media). With Instant Apps, Android owners will be able to share more freely and enjoy more content without the hassle of downloading and installing app after app after app.

Let's not forget that Google I/O is a developer conference. APIs are at the core of everything Google announced this week, and there are too many new ones to count.

The Android Awareness API, for example, can process input from seven different sensors to develop contextually aware suggestions. A revised API for Android Pay will make it easier for developers to add support for the mobile payment service to their apps. New Google Sheets and Google Slides APIs will benefit enterprise customers with easier data push-though, while the improved Classroom API will make life easier for teachers.

There are dozens more new APIs that let developers tackle an incredible range of features, functions, and behaviors on mobile devices and on the Web.

The future looks bright, and Google is helping to light the way.