Google is pushing mobile payment technology further into the mainstream with the launch of Android Pay, a similar technology to Apple Pay.

In an effort to counter Apple Pay in the nascent mobile payment market, Google announced Sept. 10 that it's rolling out its Android Pay technology to nearly one million locations in the US.

Android Pay works with all near field communication-enabled (NFC) Android devices running KitKat 4.4 or higher and with all mobile carriers.

The four major payment networks -- American Express, Discover, MasterCard, and Visa -- are all on board at launch, with banks like Capital One and Citibank soon joining a growing roster of financial institutions.

"We'll be rolling out gradually over the next few days, and this is just the beginning," Pali Bhat, Android Pay's director of product management, wrote in a Thursday blog post. "We will continue to add even more features, banks and store locations in the coming months, making it even easier to pay with your Android phone." 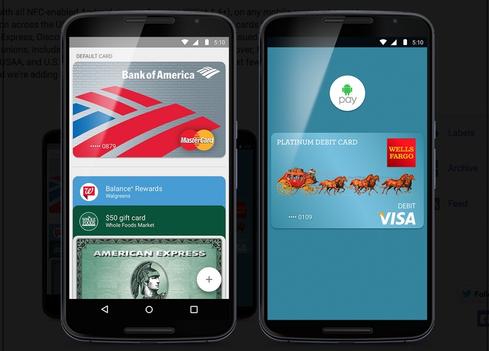 Google has baked in several security features to assure consumers that the service is safe, including industry standard tokenization, which means the real credit or debit card number isn't sent with the payment.

Android Pay also sends an instant notification after a payment has been made, so consumers will be alerted to any suspicious activity.

Existing Google Wallet users can access Android Pay through an update to the Wallet app. For new users, the service will be available for download on Google Play in the next few days.

Currently, Apple's service gives iPhone and Apple Watch users the ability to pay in over a million stores that accept contactless payments, according to Google.

[Read about whether Apple Pay is a success or failure.]

While contactless payment is still in its early days, a recent survey by Wristly found that 80% of Apple Watch owners are using Apple Pay. This figure indicates wearables may rival smartphones for best mobile payment options.

The survey of Apple Watch owners found that while the vast majority used Apple Pay first with their iPhone, around 19% of respondents, or a fifth of those who have used Apple Pay, first tried it on their Watch.

Despite a promising level of adoption, security concerns remain a major issue for consumers. Specifically, user authentication is the preeminent challenge hindering mobile wallet adoption, according to a Payfone survey of 193 payments professionals.

Nearly a third (31%) of respondents said they believe that fraud is most likely to take place when a card is first added to a mobile wallet, and 41% believed fraud is equally likely throughout the entire process.

Interestingly, Apple Wallet was chosen by 37% of respondents when asked which wallet is the most secure. But for least secure, 51% indicated they did not know.

Nathan Eddy is a freelance writer for InformationWeek. He has written for Popular Mechanics, Sales & Marketing Management Magazine, FierceMarkets, and CRN, among others. In 2012 he made his first documentary film, The Absent Column. He currently lives in Berlin. View Full Bio
We welcome your comments on this topic on our social media channels, or [contact us directly] with questions about the site.
Comment  |
Email This  |
Print  |
RSS
More Insights
Webcasts
Bolstering Your Enterprise Cyber Risk Assessment
The Experts Guide to Ransomware Response
More Webcasts
White Papers
Top Serverless Security Risks and How to Mitigate
Ransomware Security Breach Summary: Food Production
More White Papers
Reports
Future Proofing Your Network for 5G
2021 Digital Transformation Report
More Reports