For the past few years, BYOD and MDM has focused on smartphones and tablets. Now, companies like AirWatch are turning their attention to the Internet of Things.

Every year, CIOs and IT managers are confronted with an ever increasing number of mobile devices used by their workers within their enterprises. In addition, these employee-owned devices are used to access, store, and work with corporate data, creating a huge potential for cybertheft.

Now, however, it's not just smartphones. Executives and employees have access to a wide array of tablets, laptops, smartwatches, and Android Wear gadgets, as well as a growing number of devices that can be categorized as the Internet of Things. Mobile Device Management (MDM) has grown to a $2 billion industry in just a few years, and it's expected to grow to $4 billion by 2019.

If you're looking for a leader in this ever expanding industry, my money is on AirWatch. The 12-year-old Atlanta-based company was acquired last year by VMware in a $1.5 billion deal.

AirWatch has found a degree of success in selling its MDM tools to large corporations, governments, security firms, schools, and other organizations eager to better manage mobile devices, including smartphones, tablets, and laptops. 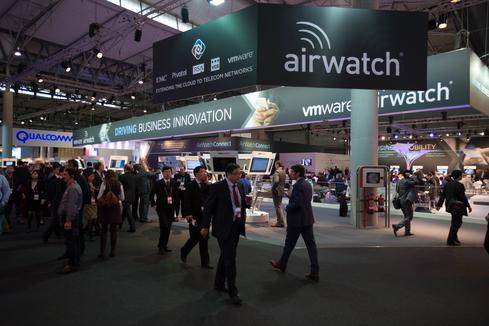 MDM was a hot topic at MWC earlier this month.

Most other MDM products come from device manufacturers such as Samsung's Knox, which offers two-way support for AirWatch, and Blackberry. Other software vendors playing in this field include MobileIron and Good Technology.

While in the past few years the challenge was to control the explosion of those mobile devices and the BYOD phenomenon, companies such as AirWatch now see IoT as the biggest management issue for all players in the ecosystem.

Other vendors are trying to capture a piece of this lucrative market, and some are proving successful, but right now AirWatch seems to be king. The company's showing at Mobile World Congress in Barcelona seems to prove that point, especially with a new Google partnership, and the creation of a new group that looks to make applications safer for work and easier for IT to approve.

First, AirWatch and Google announced their partnership at the MWC to bring Android for Work to the AirWatch platform.

Android for Work lets users of smartphones with Android OS 5.0 (Lollipop) have a separate work profile with security, management, and application support built-in. There is a downloadable app for users of previous versions. In the enterprise, IT managers can use the features to interface with popular MDM solutions.

[Read about Android for Work.]

But the big announcement during the MWC was the launch of ACE (App Configuration for Enterprise), which included AirWatch, along with Box, Cisco, Workday, and Xamarin. The idea behind ACE is to provide app developers a set of tools and guidelines to make their applications enterprise and MDM friendly.

These tools will enable them to create security and management features that enterprise IT managers require in order to certify that applications are safe for use within the company, school, or government organization.

Another important topic of discussion at the show was the management of IoT devices.

MDM companies are looking at IoT as the next big challenge for organizations, and similar to the BYOD revolution a few years ago. IoT devices can potentially create the biggest security challenge as they connect to corporate and public networks, and they need to be managed efficiently.

The future is all about the Internet of Things, it is all about data, is all about information, all about management, and it is all about location, so when you walk into a certain area you are going to get, and provide, information. When companies plan for the IoT they need to think how they can better secure the devices, serve their users, and make sure that it makes them more productive while managing the IoT properly.

MDM has grown from being a basic set of rules related to the use of personal smartphones at work to the full management of every kind of mobile device, such as tablets, laptops, and even eBook readers. Now, with the introduction of wearables and IoT devices, together with the data they collect, the challenges for MDM services and IT departments will be more complex than ever, and this is only the beginning.

Pablo Valerio has been in the IT industry for 25+ years, mostly working for American companies in Europe. Over the years he has developed channels, established operations, and served as European general manager for several companies. While primarily based in Spain, he has ... View Full Bio
We welcome your comments on this topic on our social media channels, or [contact us directly] with questions about the site.
Comment  |
Email This  |
Print  |
RSS
More Insights
Webcasts
Hybrid Cloud: The Great Balancing Act
Nip Ransomware in the FUD: Detecting Attacks Pre-Encryption
More Webcasts
White Papers
Why Add Security to Your Skill Set and How to Do It
Don't Let the Past Obstruct Your Zero-Trust Future
More White Papers
Reports
Special Report: Edge Computing: An IT Platform for the New Enterprise
How IT Security Organizations are Attacking the Cybersecurity Problem
More Reports

However, it's part of the innovation culture. IoT is an evolution that brings together a host of technologies in a converged manner capable of positively impacting the organization. The key is to remember that IT leaders must make room in their budgets for both today's technologies and tomorrow's if they wish to disrupt rather than be disrupted. Peter Fretty, IDG blogger working on behalf of CSC.
Reply  |  Post Message  |  Messages List  |  Start a Board
Editors' Choice
Hot Topics