The next version of Android is likely to be discussed at Google's developer conference, possibly along with news about a new wearable.

What comes after the letter "L"? If you answered "M," you may not be surprised to find that Android M is the codename for the version of Android that will replace Android Lollipop.

Google on Wednesday posted the schedule for its developer conference, Google I/O 2015 in San Francisco May 28-29, and inadvertently(?) disclosed a session on the as-yet-unannounced Android M.

Android M was mentioned in September 2014 in a discussion of Android open source code, but what sweet food the letter stands for – marshmallow? milkshake? or a KitKat-style brand tie-in, Mars? – remains a closely guarded secret.

The codename of the OS may be predictable from the established pattern: Android OS names since Froyo have followed the sequence of the alphabet, except for the letter "H." What may not be obvious is that Android M will bring further refinements to the enterprise use of Android.

Ars Technica captured a screenshot of a Google I/O session titled "Android for Work Update," the details of which have since been removed. The session was described as covering how "Android M is bringing the power of Android to all kinds of workplaces."

Google introduced Android for Work in February, to address Android's relative scarcity at large companies. In February, Good Technology said its iOS device activations among its customers in Q4 2014 reached 73%, up from 69% in Q3 and 67% in Q2. Android accounted for 25% of enterprise activations among Good Technology's customers in Q4. Yet, according to IDC, about 76.6% of smartphone sales during that same period were Android devices.

It's not only activations Google needs to worry about – a mere 9.7% of Android users are currently using a version of Android Lollipop. 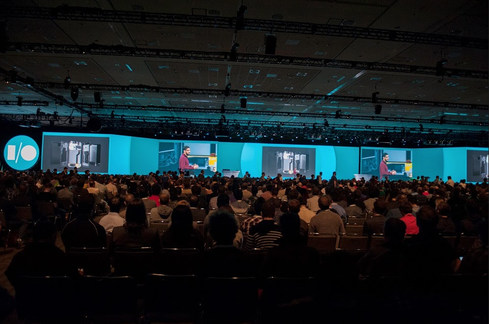 Android for Work is a program designed to help device, application, and management providers make Android more suitable for business requirements. It includes features such as Work Profiles (to keep personal and work data separate), an Android for Work app, a store for Android business applications, a suite of Work apps, and support for enterprise mobile management options.

Other Google I/O sessions of potential interest include:

Earth in real time, which will address how the company's acquisition of satellite imagery firm SkyBox will help Google "take the next step forward in satellite imaging and find new ways to help people use data from space to solve problems on Earth." Be thankful it's not your room in real-time, through your hacked webcam.

Your app, now available hands-free, which used to promise the introduction of "Voice Access, a service that gives anyone access to their Android device through voice alone." The session description has since been revised and presently makes no mention of Voice Access. Very curious.

Designing for virtual reality, which includes a review of common patterns of interaction and best practices in VR applications. Google has released a VR headset, Google Cardboard, and could end up integrating panoramic views into its geo-applications.

A little badass. Beautiful. Tech and human. Work and love. ATAP. An update on Project Ara, Google's modular phone and "wearables that we hope will blow your socks off. (We mean this more literally than you might think …)" So ... really loud wireless headphones? WiFi-enabled sandals? Too literal? Let's hope so. Is the title a code?

And there's a lot more. Check back at the end of May when all will be revealed.

Thomas Claburn has been writing about business and technology since 1996, for publications such as New Architect, PC Computing, InformationWeek, Salon, Wired, and Ziff Davis Smart Business. Before that, he worked in film and television, having earned a not particularly useful ... View Full Bio
We welcome your comments on this topic on our social media channels, or [contact us directly] with questions about the site.
Comment  |
Email This  |
Print  |
RSS
More Insights
Webcasts
Making XDR Work in Your Enterprise - May 12
How the Rapid Shift to Remote Work Impacted IT Complexity and Post-Pandemic Security Priorities
More Webcasts
White Papers
Intelligent Outcomes Are Key to Business Resilience
New Cybersecurity Paradigm
More White Papers
Reports
A Decade of Passive DNS
2021 Application Security Statistics Report Vol.1
More Reports