50%
Tweet
Microsoft hopes HTC's new Windows Phone 8S and 8X devices, announced Wednesday, will set a new standard for its mobile OS. Designed "from the inside out" for Windows Phone, the two consumer-oriented handsets land in a market crowded with the latest from Nokia, Apple, and Samsung, but they are well equipped and will be available on Verizon, AT&T and T-Mobile.

HTC and Microsoft announced their new joint venture at a press conference in New York on Wednesday--a pair of phones intended not just to be new HTC smart phones, but the leading Windows Phone 8 devices.

"Beautiful software inspires beautiful hardware," said HTC CEO Peter Chou during his unveiling of the two new phones, the Windows Phone 8S and its slightly larger cousin, the Windows Phone 8X. Both devices, he claimed, along with HTC's VP of design, Scott Croyle, have been designed from the inside out to complement the Windows Phone operating system. HTC claims that the pyramidal stacking of the internal components allows for a sculpted edge all around the phone that lets it sit comfortably in the hand.

Microsoft CEO Steve Ballmer spoke of the close and long-standing partnership between Microsoft and HTC. The phone's name, he said, was chosen to reflect the degree of Microsoft's backing: the 8S and 8X are the flagship incarnations of Windows Phone 8, not just one of many possible Windows Phone 8 devices to come. Verizon, T-Mobile, and AT&T will be carrying the 8S and 8X as part of their lineup in the U.S. this November, and over 100 other carriers worldwide are slated to follow suit. 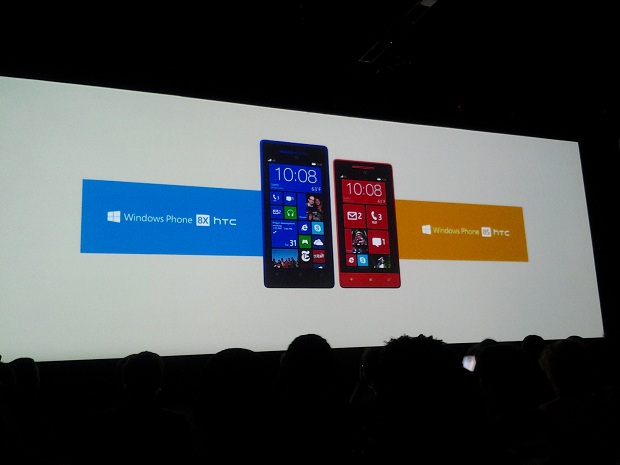 "Personal" was the word that came up again and again throughout the presentation. Most of the features emphasized in the 8S and 8X were broadly consumer-oriented, such as the 8-megapixel, 28mm-lens rear-facing camera; and the 2.1MP 1080p-capable front-facing camera with f/2.0 and 88-degree viewing angle. The phones also will have Beats Audio, featured in earlier HTC phones as well.

The differences between the two phones mostly come down to extras. The 8X sports a full 720p, 4.3" screen as well as HTC's proprietary imaging chip; the 8S's screen is only 4" and does not have the imaging chip. Both phones have Gorilla Glass fronts, and dual-core Snapdragon S4 processors, although the 8X is faster, with a 1.5-Ghz chip vs. the 8S's 1 GHz, and more capacious, with 16 GB of internal storage and 1 GB of RAM vs. the 8S's 4 GB and 512 MB, respectively. Batteries are almost identical--the 8X has an 1800 mAh battery, the 8S a 1700 mAh--but expansion is not: the 8S sports an MicroSD card slot while the 8X, interestingly, does not.

Both Microsoft and HTC seemed eager to keep the hands-on demonstrations locked down, allowing only guided tours provided by HTC representatives. One such rep told me this was because Microsoft was "anxious to announce some additional features before launch," so presumably some final degree of spit-and-polish is on the way.

Windows Phone 8 is entering a crowded end-of-year market for phones. Apart from the iPhone 5, which sold two million units its first day, Motorola is rolling out its new Droid Razr phones; Samsung has, despite its legal battles with Apple, new versions of its Galaxy devices on the way, including the Galaxy Note; and Nokia's Lumia 920 is yet another incarnation of Windows Phone's promise.

It hasn't been for lack of good hardware or software that Windows Phone has languished. Perhaps two manufacturers can finally do for Windows Phone what only one couldn't: give it a place in the market beyond the single digits.