LG and Samsung just couldn't contain themselves: Both companies showed off new smart wearables just days before the IFA trade show starts in Berlin. LG's device uses Android Wear, while Samsung's relies on its homegrown Tizen platform. They will go head-to-head with Apple's wearable, which is expected to arrive shortly.

LG was first out of the gate with the G Watch R. The new smartwatch is LG's second stab at the Android Wear platform; the company released the G Watch in July. The G Watch R will go on sale in October. As its name implies, the R is round (the G Watch is square), and it features a 1.3-inch plastic OLED screen with 320 x 320 pixels. LG says the screen can be used both outdoors and in. LG further notes the R uses all the pixels of the screen, unlike the Moto 360 (also round), which has a black bar across the bottom. 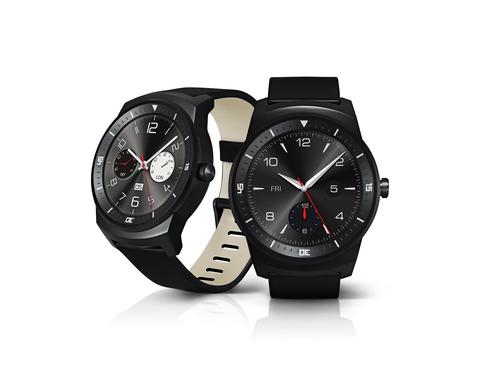 LG put a bit more effort into the R's design. The chassis is made of stainless steel and the strap of calf skin. Despite the more refined look, it still garners an IP67 rating for protection against water and dust: The device can stand in a meter of water for up to 30 minutes with no fear of it going kaput. Powered by a 1.2-GHz Qualcomm Snapdragon 400 processor, the device includes 512 MB of RAM and 4 GB of storage for apps and files. It comes with a full array of sensors, including a 9-axis gyroscope, as well as an accelerometer, a compass, a barometer, and a heart rate monitor. The watch has a 410mAh battery, but LG didn't say how long it will last. Pricing wasn't discussed.

[What new features would you like to see in Apple's new iPhone? Read 8 Things We Want In iPhone 6.]

Samsung's smartwatch, the Gear S, is novel in that it can make and receive phone calls. It supports global 3G frequencies and can also send and receive text messages without requiring a smartphone. It also has Bluetooth and WiFi radios and can connect to a smartphone when needed for smart notifications. It includes Samsung's S Voice tool, which can be used to control the device via voice commands. 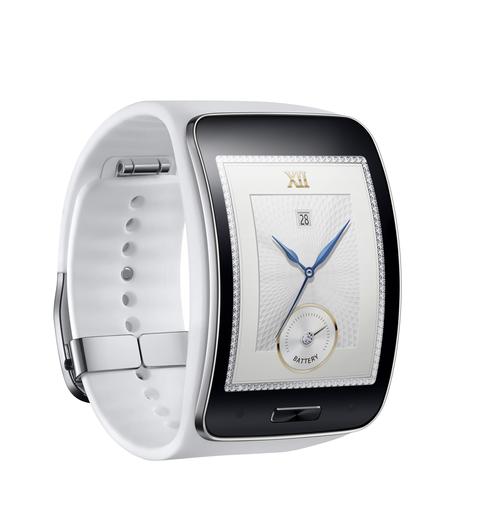 The Gear S features a large curved Super AMOLED display, which stretches 2 full inches across the diagonal and has 480 x 320 pixels for resolution that rivals some smartphones. It is powered by a dual-core 1.0-GHz processor and includes 512 MB of RAM and 4 GB of storage. Its battery is considerably smaller than the G Watch R's, at just 300mAh. Samsung says it is good for two days of use between charges.

Unlike the G Watch R, the Gear S relies on Samsung's Linux-based Tizen platform. Samsung claims to have more than 1,000 Tizen apps available to its smart devices. Google hasn't said how many Android Wear apps are available, but Tizen's future is cloudy at best. Developers may do well to hedge their bets with Android Wear over Tizen. The Samsung Gear S will also launch in October. Pricing will vary by market.

Both devices may arrive after Apple's smart wearable, which could be problematic for LG and Samsung. Re/Code reported late Wednesday that Apple will announce its wearable alongside the iPhone 6 on September 9. Re/Code's track record is pretty good as far as arrival dates are concerned. Many expect the iPhone 6 to reach stores as soon as September 19. It would behoove Apple to begin selling the iWatch (or whatever it is called) on the same day.

The market for wearables is clearly heating up. Neither the G Watch R nor the Gear S, however, do anything to shake up or disrupt the current thinking on wearables. Perhaps Apple's device will.

Eric is a freelance writer for InformationWeek specializing in mobile technologies. View Full Bio
We welcome your comments on this topic on our social media channels, or [contact us directly] with questions about the site.
Comment  |
Email This  |
Print  |
RSS
More Insights
Webcasts
Key technology trends in 2021 - Making these technologies work for your business
People Are The Most Important Part of Autonomous SOC
More Webcasts
White Papers
Why Add Security to Your Skill Set and How to Do It
Key Strategies for Managing New Risks in Cybersecurity
More White Papers
Reports
The State of Threat Detection and Response
How Data Breaches Affect the Enterprise (2020)
More Reports

I like that the Gear S has its own 3G and Wi-Fi capabilities and operates somewhat independently from the smartphone. Is it tethered to the phone at all? Could you make a call with the watch at work if your smartphone is at home? I assume the smartwatch becomes part of your existing mobile plan, yes?
Reply  |  Post Message  |  Messages List  |  Start a Board

Here are some scenarios where your questions can lead to some good use cases:

- In hospitals, the application of having the medical staff have smart watches has some good potential. Imagine staff being able to send mass communications and notifications, where the staff only needs to turn the wrist a little bit to read and reply back, therefore there hands don't have to drop what they're doing.

What I'm trying to say is that for consumers it's more about fashion and personal choice, but for real world usage, I think there's some definite potential
Reply  |  Post Message  |  Messages List  |  Start a Board

These are really great applications.  I think for home monitoring, specially for elderly care, this smartwatch will be great, since it has a accelerometer if an elderly person fall it could send message for first responders.  I think the public is not ready for smartwatches.  I think we should really ask ourselves, what will be the features that people would like to see on a smartwatch? What will be the tasks that would make smartwatches indespensable for people?  This continues to be the missing question.
Reply  |  Post Message  |  Messages List  |  Start a Board

I think that another thing to consider is the technology itself, and I think it's a fair assumption that onces both the hardware and the software matures, regarding both development and consumer acceptance, we should see many appplications and economies of scale (since I don't make most folks can afford today's current smart watch prices, but can with a more reduced scope of use)
Reply  |  Post Message  |  Messages List  |  Start a Board

I agree the applications are very limited right now. I think they are in the same stage as mp3 players were when they first came out.  Also, with the economic situation as it is right now. I don't think many people will want to spend $400 or $500 on a expensive watch.
Reply  |  Post Message  |  Messages List  |  Start a Board

Agreed, only the most tech enthusiast will jump on the latest tech wear, but most consumers will probably wait it out.

But as has been mentioned several times on this thread, there are numerous applications that can spin off, so the limitations will be based on the use case.... exciting!!!!
Reply  |  Post Message  |  Messages List  |  Start a Board

I think we should really ask ourselves, what will be the features that people would like to see on a smartwatch?

A fair question. How about a smartwarch that can do what a smartphone does? It looks like Samsung is getting there. Although it has a long way to go, specially if it relies on Tizen

Will people buy it? It's difficult to answer, but I believe the main problem is still the small screen, as someone pointed out before. I don't see any way around that.

Obviously marketers think it's all the rage because an increasing number of consumer electronics plays are putting out some version of wearable gear. But who's actually buying it?

I know you can't lump all wearable stuff together, but I've seen pretty tepid reviews of some of the early entrants and given the capabilities, I'm not sure I get the point of the whole category yet.
Reply  |  Post Message  |  Messages List  |  Start a Board

I still think these wearables lack app market and there is great room which developers can fill in. Samsung previously launched Gear app challenge, inviting developers all over the world to participate. Such initiatives can push developers to publish apps for such markets.
Reply  |  Post Message  |  Messages List  |  Start a Board

Wearables are progessing but I still believe they are in infancy. Its good to see that we are now seeing multiple vendors Apple, Google, Samsung compete in the race which will surely bring something great and much more useful.
Reply  |  Post Message  |  Messages List  |  Start a Board

I'm on the same boat, it will be great to have more competition to push each manufacturer to be better. Still waiting on Apple's wearables, some reports say it's coming early 2015. Long time coming so hopefully they release something competitive...something Android has not yet managed to release months earlier.
Reply  |  Post Message  |  Messages List  |  Start a Board
Editors' Choice
Hot Topics

More Informa Tech Live Events
Key technology trends in 2021 - Making these technologies work for your businessNip Ransomware in the FUD: Detecting Attacks Pre-Encryption Cybersecurity's Next Wave: What You Should Know