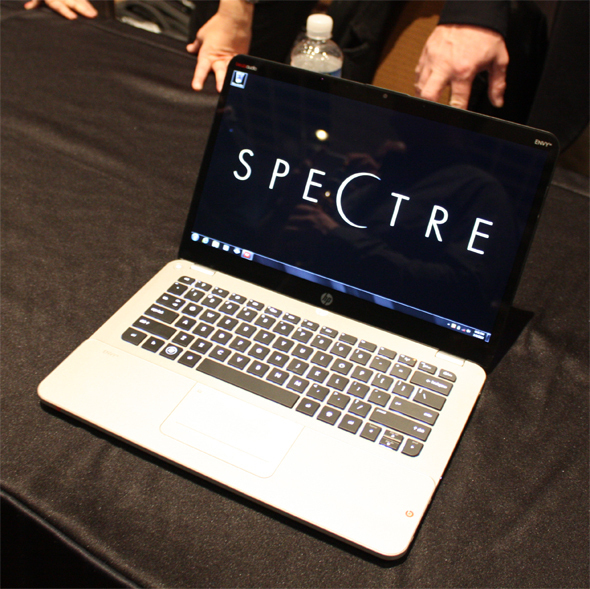 Ultrabooks Of CES: Visual Tour
(click image for larger view and for slideshow)
Many Android enthusiasts support the idea of "stock Android." The Samsung Galaxy Nexus, for example, is the first device running a clean version of Android 4.0 Ice Cream Sandwich. This means the handset maker and the network operator kept their mitts off of it and let it ship intact with the Android experience that Google intended.

There's a fervor about this idea that borders on the religious. Those who seek the pure, unadulterated version of Android pick the Nexus-branded smartphones for this reason.

Network operators, however, don't really want to sell stock Android smartphones and apparently don't give a whit about all this purity nonsense.

[ Why are new Android smartphones running an old operating system? See Android 4.0 A No-Show At CES. ]

"Verizon and AT&T don't want seven stock [Ice Cream Sandwich] devices on their shelves," he said. "The vast majority of the changes we make to the OS are to meet the requirements that carriers have."

In other words, the network operators are fine with the idea of allowing handset makers to tweak their Android user experience so that it stands apart from all the other Android handsets sitting on their store shelves.

Each of these three user interface skins has pluses and minuses. They prioritize certain aspects of the usability, while downplaying others. They also make it easier for the hardware maker and network operator to push branded services on which they want to capitalize. The idea makes sense. After all, how can the retail sales staff pitch three different smartphones to potential customers if they all have identical software on board? It makes the sales reps' jobs harder.

The bottom line here is that stock Android devices will continue to be a relatively rare thing. The Nexus handsets will showcase each new Android platform in leading-edge hardware. Nearly every other Android smartphone, however, will be "differentiated."

InformationWeek is conducting our third annual State of Enterprise Storage survey on data management technologies and strategies. Upon completion, you will be eligible to enter a drawing to receive an Apple 32-GB iPod Touch. Take our Enterprise Storage Survey now. Survey ends Jan. 13.

Carriers should focus on differentiating themselves by the quality and coverage of their network and the price plans they offer. If AT&T invested more effort in improving their network and customer service, they might actually show some progress against Verizon in customer satisfaction. And what good is a phone with great data services if the carriers don't offer unlimited data plans?
Reply  |  Post Message  |  Messages List  |  Start a Board

Yes but the customers don't want it. We don't want your crappy shell gumming stuff up. Get this.
Reply  |  Post Message  |  Messages List  |  Start a Board

My Nexus 1 was awesome. It didn't have enough memory, bu aside from that, it worked great. My Galaxy S II is kind of wonky. Some things are better, some are worse. I would LOVE the option to just buy a phone with a stock OS in it.
Reply  |  Post Message  |  Messages List  |  Start a Board

Carriers exist to make as much money as possible, and they see consumers as a cash cow. They don't care if we think they're idiots, as long as we buy into the policies that make them the most money.
1) long term contracts and heavily subsidized hardware
2) billing for potential vs. actual use
3) outrageous penalties for exceeding #2
4) software update policies that make hardware appear dated soon after the consumer is locked into another long-term contract
5) locked bootloaders to enforce #4
6) text messaging fees (on smart phones? I still haven't figured out how anyone justifies paying for this...)

I'm sure I missed a few, but regardless, don't expect any of these to change in order to "satisfy the customer".

I replaced my Droid with a Thunderbolt, and for 3 months absolutely hated it. I lost a great deal of core functionality with HTC Sense (contact manager, car mode, and gallery, among others) and battery life was terrible. Yes, Verizon had me on right where they wanted me: ready for a better phone. Instead, I learned how to root the phone, installed Cyanogenmod 7 (close to pure Android) and got a "new phone" for free. Fast, twice the battery life, solid radio...I'm looking forward to CM9 (ICS), but for now I'm quite happy with my Thunderbolt running the latest Gingerbread. Honestly, the Thunderbolt is a great phone - as long as it has a good ROM running on it.

Here's the problem: If the carriers gave us what we want (pure and current Android), their sales would fall considerably. Hardware - not much to differentiate. My 9mo old single core Thunderbolt (minus bloatware) will easily keep up with my wife's dual core Motorola/Motoblur. OS and crapplications are the only way to differentiate phones and drive sales, and there is a financial incentive to keep old ROMs on phones that were sold only a few months ago. If the only way we can get the latest OS is to buy a new phone, they have us right where they want us. The last thing carriers want is for the general consumer to be able to chose and install their own OS, and locked bootloaders are one way to keep us reliant on them.

Thankfully we have groups like Cyanogenmod producing high quality ROMs as an alternative. Unfortunately for us, manufacturers have multiple incentives to hire the developers!
Reply  |  Post Message  |  Messages List  |  Start a Board

Yes, yes, yes, and more yes. Agree 100% with all you said here. I've made the interstate/pipe comparison several times. There is no more apt analogy.
Reply  |  Post Message  |  Messages List  |  Start a Board

Really? They exist to sell more services and phones? And they make phone variants? I think you are completely and totally confused. When has a carrier ever manufactured a phone? Or for that matter a service. Sure they block services that are actually a part of the phone so they can then sell it as a "service." i.e. Verizon blocking Google Wallet, blocking built in hot spots.

I have worked with many manufactures of products in the wireleess industry including motorola. I belive that "CARRIERS" notice how I say that; need to spend more time doing what we pay them for. To carry are signal to a land based network; and less time trying to nickle and dime us on stuff that half thee time was opeensource to begin with.
Reply  |  Post Message  |  Messages List  |  Start a Board

You guys are completely confused. Carriers exist to sell more services and more phones. They are maximizing their sales by making phone variants.
The fact you are on this website means you are not an average buyer...
Reply  |  Post Message  |  Messages List  |  Start a Board
Page 1 / 3   >   >>
Editors' Choice
Hot Topics