Tablets are losing some of their luster, but Apple is still selling more devices than Microsoft.

Mac computers. The upcoming slate of ultra-slim hybrid devices with next-gen Intel processors could have more mass market appeal, however.

Outside of tablets and PCs, Gartner expects smartphone growth to continue, with shipments set to hit nearly 2 billion units in 2015. Analysts don't expect this growth to allow more OS players to enter the industry, however. With Android dominating overall market share and Apple solidifying its hold over the high-end market, Gartner concluded it remains "difficult for alternative ecosystems to become more than niche players." 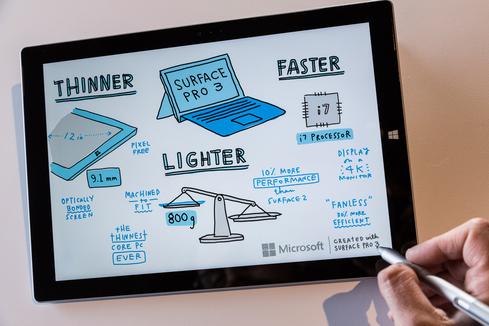 Two-in-one devices such as the Surface Pro 3 have injected some life into the Windows market, but Microsoft's mobile growth continues to trail the competition.

This complexity is reflected in Gartner's projections for the three major computing platforms: Windows, Android, and iOS/Mac. Although there are clear limitations to lumping desktop PCs and smartphones into a single ecosystem category, the shift toward mobile devices has reshuffled which apps and services carry the most cultural and economic sway. Gartner expects Windows to remain the dominant PC OS, but with PCs becoming just one component in multi-device use cases, Microsoft could face challenges if its mobile platforms don't pick up steam.

Earlier this year, Microsoft execs admitted that Windows runs on only 14% of devices overall and pledged to gain more users. The company is currently hedging its bets between the Windows ecosystems and an increasingly cross-platform software strategy.

In mature markets -- where users tend to buy higher-margin devices and invest more in accessories, apps, and services -- Gartner found that Android is the leading OS overall, with over 313 million device shipments projected this year. Apple's ecosystem is expected to finish a distant second in 2014, with nearly 168 million iPhone, iPad, and Mac shipments. Windows shipments are expected to hit 141 million units in 2014.

In 2015, Gartner expects the same pecking order though it projects Apple will gain ground while Windows falls farther behind. The firm estimates device shipments within Apple's ecosystem will expand nearly 9% next year in mature regions, followed by Android with 7.7% growth, and Windows with around 5%.

In developing markets, Android will amass more than 900 million device shipments this year, and over 1.1 billion in 2015, according to Gartner's data. Windows still outpaces Apple's platforms in these regions, with an estimated 194 million this year and another 221.8 million projected for 2015. Macs and iOS devices are expected to account for around 95 million shipments this year in developing regions and more than 112.6 million next year.

Vista? I think you might be among the last users standing! We just did a Windows survey, results below. XP use is a bit surprising.

Yes, agreed -- the new iPhone hardware is significantly better. Whether the same will be true of the iPads, I guess we'll know soon!
Reply  |  Post Message  |  Messages List  |  Start a Board

Shane and I are both New Englanders. Maybe it's that Yankee frugality -- I also tend to drive cars until they become undependable and repairs become more costly than the vehicle. If a physical item that took natural resources to produce still serves its purpose, I say, do the Earth a favor and use it until it doesn't.

I think device makers would be smart to releease hardware only when there is a significant advance and pivot to doing more in firmware.
Reply  |  Post Message  |  Messages List  |  Start a Board

Exactly, Shane. *Could* I buy a new tablet every other year? Sure. But why would I? Of course, I am an Android person. I get that iThings have the "latest and greatest status symbol" factor, but still. Don't get it.

Even if the tablet is half that price, why toss it? Save the quicker turnover -- and investment -- for phones, which we beat up day after day. I think tablets got more use when phones were smaller and laptops were clunkier. But now their life expectancy is growing.
Reply  |  Post Message  |  Messages List  |  Start a Board

The tablet novelty is slowly wearing off. Personally I've had three phones in the time I've had my Google Nexus tablet, and each phone has gotten bigger. The tablet works well enough, but I use it less frequently than I used to when my phone was smaller. Tablets are in a tough spot. They're getting double dinged: by bigger, better phones on one side and by dynamic two-in-one options that can replace traditional laptops on the other.
Reply  |  Post Message  |  Messages List  |  Start a Board

I am not sure why anyone is surprised that people don't toss their $700 tablets every 24 months. AmI missing something?
Reply  |  Post Message  |  Messages List  |  Start a Board
<<   <   Page 2 / 2
InformationWeek Is Getting an Upgrade!