Epic tweets could arrive before the end of April, according to a report. Users are not happy about the prospect so far, but it makes business sense.

Twitter is reportedly preparing to raise the number of characters allowed in a tweet from 140 to 10,000. But the company may be planning more of an interface change than a text field expansion.

According to Re/Code, Twitter intends to launch its extended tweet format during the first quarter of 2016. The tech publication initially reported in September last year that Twitter was building a new product that would allow users to share tweets that are longer than the company's 140-character limit.

Twitter declined to comment. But CEO Jack Dorsey on Tuesday addressed the report indirectly through a Twitter post that consists of a screenshot of text, which has become a common way to sidestep the service's 140 character limit. 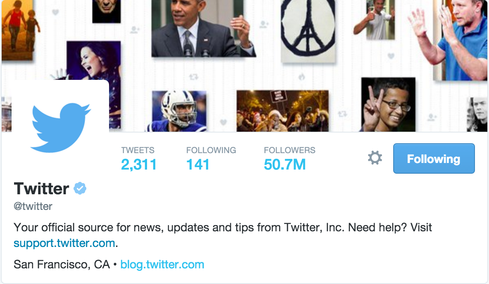 "We've spent a lot of time observing what people are doing on Twitter, and we see them taking screenshots of text and tweeting it," Dorsey wrote. "Instead, what if that text ... was actually text? Text that could be searched. Text that could be highlighted. That's more utility and power."

Text would also be more valuable to Twitter as an advertising platform. While it's possible to extract text from images, doing so is more computationally intensive than text parsing. Images also require more storage. By providing a framework to post lengthy passages of text, Twitter can reduce its costs and enhance its ability to understand what its users are talking about. In turn, it will be able to deliver more relevant ads.

What's more, hosting long-form content would allow Twitter to become a news publishing platform and to offer a service similar to Facebook Instant Articles. Presently, tweets often serve to take readers to other websites. By keeping users focused on its website rather than sending them elsewhere, Twitter may be able to generate more revenue.

However, Dorsey's post suggests the traditional 140-character tweet won't go away. Lauding the format's speed and brevity, he notes, "We will never lose that feeling."

That suggests expanded tweets, if deployed, may actually be stored as two distinct but linked elements, the first 140 characters and any remainder. Twitter could thus preserve the ability to scan its tweet stream, while allowing users to expand long-form tweets at their discretion.

Among the more than 300,000 tweets associated with the #Twitter10k hashtag by noon PT on Wednesday, many expressed dissatisfaction. A common sentiment is that super-sized tweets will turn Twitter into Facebook. While Twitter users may find this undesirable, the company's management presumably wouldn't mind being seeing Twitter become as popular and profitable as Facebook.

Twitter needs all the revenue growth it can get. Its stock price remains below its IPO debut last year. Whether or not epic tweets become a reality, Twitter needs ways to generate more revenue.

In keeping with that aspiration, Twitter on Tuesday introduced a new ad product called conversational ads, which invite viewers to engage with brands. The ads, which appear in the tweet stream, include "call to action buttons with customizable hashtags that encourage consumer engagement." The ads are "conversational" because retweets are answered with a suitably brief thank-you message from the advertiser.

Thomas Claburn has been writing about business and technology since 1996, for publications such as New Architect, PC Computing, InformationWeek, Salon, Wired, and Ziff Davis Smart Business. Before that, he worked in film and television, having earned a not particularly useful ... View Full Bio
We welcome your comments on this topic on our social media channels, or [contact us directly] with questions about the site.
Comment  |
Email This  |
Print  |
RSS
More Insights
Webcasts
Strategies for Success with Digital Transformation
ROI and Beyond for the Cloud
More Webcasts
White Papers
Passwordless: The Future of Authentication
Transforming the Corporate WAN: Enterprise Network Insights
More White Papers
Reports
2021 Top Enterprise IT Trends
DNS Network Traffic Volumes During the 2020 Pandemic
More Reports

I don't twit, but I have a twitter account. I look at it occassionally (once or twice a month would be tops, I'm sure). I've never found the love affair of it, never really cared what most people had to say 'at the moment', never understood the point of people twittering the step-by-steps of everything or anything (like a twit-by-twit call of a hockey game, or the useless spur of the moment "THis is what I think of what Sen. Cruz just said in the debate"). Hey, at least it isn't filled with cat videos and pictures of people at various locations ("Hey, we're at the grand canyon! Here's a picture of us three real close up, but behind my left shoulder you can kind of see some of the majesty!") that is facebook's "Look at me" culture. (I'm old fashioned, I still do most of my communications via email - just call me a geezer).

But unless you happen to be reading your twits all the time, seeing one that says "Prayers to all those in Paris", for example, doesn't really help one know what just happened. Very little on twitter would, you'd have to go to other sources to actually get information. And at that point, you might as well stay there.

As described by the writer, having the capability to post larger stories or messages on Twitter that don't show up on your feed (or just summed up in 140 characters or less), it would keep people on twitter more. Of course, it'll probably just turn into a place where any ni-twit can post their manifesto against whatever group they despise with some serious writing in there somewhere.  But twitter isn't making money on most of these folks who are on twitter. And in the end, twitter is a business, not just a place where people can tell you their thoughts of the latest star wars trailer or the price increases at Trader Joes.
Reply  |  Post Message  |  Messages List  |  Start a Board

Twitter is useful in its own way for its immediacy and brevity for self-selected communities of followers on the Web. 10,000 character messages are neither immediate, or, needless to say, brief. I can see why they're doing it but I'd be cautious about disrupting the thing that majes you unique.
Reply  |  Post Message  |  Messages List  |  Start a Board

Wow, now people with nothing to say can say even more. I'm excited. They should give this new feature an exciting new name, like "email".
Reply  |  Post Message  |  Messages List  |  Start a Board

10,000 character tweets   -- so Twitter can compete with Facebook? So they can run longer ads nobody wants? So they can have long, useless blogs nobody will read?

They still have not figured out how to monetize Twitter, but this isn't it.

It's value seems to be as a running "newswire" with commentary -- the world's  newswire is a good spot to be in.