Remote patient monitoring is ready to reinvent routine healthcare tasks. So what are we waiting for?
Paul Cerrato
Contributor
July 16, 2013 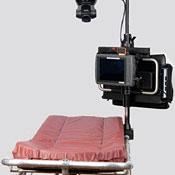 Slideshow: Wireless Telehealth Brings Medical Help To Those In Need
(click for larger image and for full slideshow)
How much proof is enough proof? That's the question telemedicine advocates must be asking themselves as they watch the wheels of bureaucracy slowly grind to put the infrastructure in place to make remote patient monitoring and interaction a reality. Given the mountain of evidence supporting telemedicine's value, we should all be growing impatient.

The most recent study, publishing in the Journal of the American Medical Association, found that patients with uncontrolled hypertension who were given a home blood pressure telemonitor to transmit their blood pressure to pharmacists -- who then adjusted their medication as needed -- fared much better than control groups who got routine care.

Compared to those in the control group, patients using the telemonitoring devices saw on average a drop of more than 10 mm Hg in systolic pressure over six months. And even after the pharmacists stopped adjusting their meds at the end of a year, the benefits persisted. At 18-month follow-ups, the "plugged in" patients were still 6.6 mm Hg ahead of control patients. The research team used a home blood pressure monitor that stored and transmitted readings to a secure website by modem, and pharmacists consulted with patients by telephone every two weeks.

[ Get more opinions on telemedicine. Read Why Telemedicine Should Be Integrated With EHRs, ACOs. ]

This is just one of many studies that have shown the value of telemedicine. A recent report in the Journal of Medical Internet Research concluded that low-risk newborns just released from a Spanish hospital fared better when they were telemonitored, as opposed to monitored with a standard hospital visit 48 hours after hospital discharge. Almost 16% of the 114 babies who had standard post-discharge care had to return to the emergency room within a month after they were born, versus only 5.6% of the 90 infants who were telemonitored. The telemonitoring approach was considerably less expensive as well -- hospital-based followup cost 182.1 euros per patient while Internet-based followup cost only 86.1 euros.

Parents in the telemonitoring group received instructions on how to use a specially designed website and filled out twice-weekly questionnaires about their babies' health. If nurses saw any abnormalities in these reports, they would contact the family by email or phone to resolve the problems.

Unfortunately, compelling research isn't enough to get the U.S. on the telemedicine bandwagon. The two main sticking points for clinicians who want to practice telemedicine are insurance coverage and licensure.

Many third-party payers still live in the Stone Age and don't see the value of covering these services. And many state legislatures have yet to see its value either. On a positive note, in April, New Mexico became the 17th state to require that private insurers cover telemed services "to the same extent that the service would be covered if they were provided in-person," according to the American Telemedicine Association. But even a quick scan of the ATA's list of pending state initiatives reveals that too many states are dragging their feet, or approving limited telemed services. Several of the bills have died in session.

Complicating matters further, even when a state provides the much-needed insurance coverage, clinicians have to avoid practicing medicine outside of the state (or states) in which they are licensed. Yet the whole purpose of remote monitoring is to give patients access to medical practitioners, regardless of where they are physically located. It's a regulatory nightmare that desperately needs fixing.

The law, and the politicians who create and execute it, need to catch up with the research that proves telemedicine is part of the solution to the nation's healthcare debacle. We've waited too long.