State and federal websites' failure to work as advertised in first days of insurance availability can be blamed on software bottlenecks due to poor design.

Healthcare Robotics: Patently Incredible Inventions
(click image for larger view)
This is what happens when government decides it can provide an online shopping experience to rival Expedia. The online insurance exchanges mandated by the Affordable Care Act choked on a surge of traffic when they launched Tuesday to begin signing up consumers for policies that will take effect in January.

The widespread problems affected both the states that had set up their own online insurance websites and the federal government's Healthcare.gov site, which was available to the citizens of 36 other states. Although there had been advance warning of functional glitches and features that would not be ready for the initial launch, the sites largely failed at a much more basic level: They were incapable of fully meeting the demand from the public. The citizens flocking to the site because they are currently uninsured or paying too much for health insurance encountered websites that were slow, unresponsive, or just unreachable.

On its second day of operation, the Healthcare.gov site was still having problems. The website itself was available as a marketing website, just not consistently available as an application. At the first stage of the process, where users create an account and share the information necessary to match them with the plans they are eligible for, the signup form was only intermittently available. The most visible change from launch day to day two was a prettying up of the error message page, a sort of equivalent of the infamous Twitter "fail whale" shown when twitter.com is too busy -- saying, "We have a lot of visitors on the site right now. Please stay on this page. We're working to make the experience better, and we don't want you to lose your place in line. We'll send you to the login page as soon as we can. Thanks for your patience!"

[ Unsafe at any speed? Read Online Health Exchanges: How Secure? ]

On the plus side, boosters of the law and backers of President Obama tried to shrug off the poor Web experience as evidence of how much overwhelming demand there was from citizens for better access to affordable health insurance. As a general principle, Web software architects sometimes argue that it can be impossible to model how consumers will interact with a website until it's actually available to the public. So when the public relations folks for the exchanges complain of unexpectedly high traffic, should we cut them a little slack?

"The excuse that the load was unexpected -- in my opinion, that's not a good excuse," said Jyoti Bansal, founder and CEO of AppDynamics, an application performance management firm that counts Netflix among its customers. "They should have known better about that."

Planning and testing for a big website launch like this is certainly challenging, but it's not impossible, Bansal said. The right way to plan to have enough website capacity is to take your expected demand and at least double it, then create a series of test scripts that simulate that load, he said. 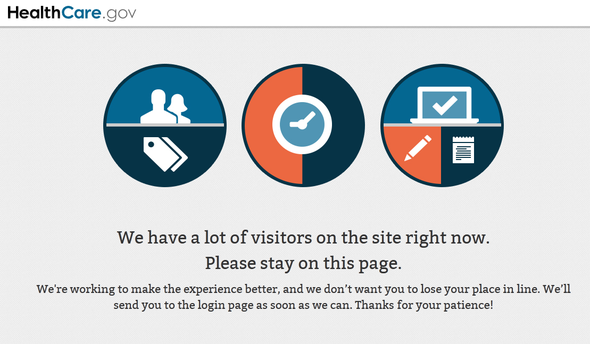 Bansal suspects the real problem is that even though Obamacare proponents talked about wanting to provide a slick online consumer shopping experience, the government technologists (and even the consulting firms they hired) had too little experience with what that really means. Most federal and state organizations run largely informational websites or applications that serve a relatively small population of employees and contractors, he said. "Very few government organizations would have these sorts of very large scale, public, interactive, transactional Web apps -- it's a newer thing for them."

Contractors do what they are incented to do. Were the contractors incented to make load testing a key part of their project? Companies like Akamai and Soasta have deep expertise in this area; Do the contractors used here have that type of alumni?
Reply  |  Post Message  |  Messages List  |  Start a Board

The notion that these sites should've bought a whole lot more processing capacity to avoid any bottlenecks doesn't ring true to me, from a cost-benefit analysis of using taxpayer money. Is it really worth such over-provisioning data center capacity to avoid all delays and failures in these early, spikey days of visits? David's comparison to Twitter's Fail Whale is a good one, these things do happen in the private sector as well, where companies make ruthless "is it worth it?" tech buying decisions.
Reply  |  Post Message  |  Messages List  |  Start a Board

This came in via email:

Considering all of the highly visible failures in the past several
years, I am somewhat surprised that the Federal Health Website continues to
demonstrate sluggish performance. With the visibility surrounding this
milestone in the Affordable Care Act, I would have expected that those
responsible had anticipated this volume and prepared to ensure the system would
be able to accommodate the volume of transactions.

LetGÇÖs remember that the definition of a systemGÇÖs quality is
contained in the requirements. The better they are defined, managed, and
validated, the higher the quality of the system delivered. I suspect that
most who have attempted to use the system would claim that the quality is
lowGÇªat least in the registration phase.

Ensuring that the system performance requirements are
correct and are properly validated is where I recommend that the HHS focus its
energy in order to make it easier for people to register for the
new healthcare program.

Prediction: traffic will slow down in keeping with Yogi Berra maxim: "Nobody goes there anymore. It's too crowded."
Reply  |  Post Message  |  Messages List  |  Start a Board

What's your bet on how long it will be before these sites are running smoothly?
Reply  |  Post Message  |  Messages List  |  Start a Board
InformationWeek Is Getting an Upgrade!