SEARCH
A minimum of 3 characters are required to be typed in the search bar in order to perform a search.
Announcements
Alert
Got some free time? Grow your knowledge from the comfort of your computer for FREE!
Alert
Are you looking to stay on top of IT trends? Check out our FREE webinars and virtual events!
Alert
Planning for 2023? Be sure to check out our upcoming in-person events!
Report
How does your salary stack up? 2022 IT Salary Survey Results Revealed
PreviousNext
PC & Servers
3 MIN READ
News 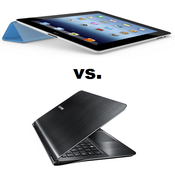 Tablet Vs. Ultrabook: 10 Ways To Choose
(click image for larger view and for slideshow)
Wednesday's headlines might have been dominated by iOS 6 and the legions queueing up for the iPhone 5, but Dell made sure the approaching Windows 8 barrage wasn't forgotten. With the introduction of the business-oriented Latitude 10 tablet and Latitude 6430u Ultrabook, the Texas-based company sent a reminder that the enterprise market, already complicated by BYOD, will soon decide if Microsoft's new OS lives up to the hype. Dell also looks for the products to help it rebound from a rough Q2 in which PC sales, once the company's backbone, declined.

A tablet fueled by a next-gen Intel Atom system-on-a-chip (SoC), the Latitude 10 will ship with Windows 8 Professional pre-installed. The device sports a 10.1-inch, Gorilla Glass-protected, 1366 x 768-pixel touchscreen and features a swappable battery--an appealing tablet rarity, though the device's 18-hour battery life might make the perk redundant for many users.

The Latitude 10 also is equipped with an assortment of ports and slots: one full-size USB connection, a micro-USB charging socket, a mini-HDMI port, a headphone/microphone jack, an SD card reader, and micro-SIM for WWAN. These options can be expanded via a standalone desktop dock. Other specs include an 8-MP camera on the rear, a front-facing HD camera for video chats, 2 GB of RAM, and up to 128 GB of eMMC NAND storage. As an enterprise-grade device, the Latitude 10 also features security options such as Dell Data Protection encryption and smartcard and fingerprint readers.

The Dell Latitude 6430u, meanwhile, is the first Ultrabook in the Latitude line--though with a width of 0.82 inches and a weight of 3.7 pounds, it's relatively large for its class. The extra heft, though, contributes to a tough exterior designed to withstand workplace abuse. Forrester analyst Sarah Rotman Epps told InformationWeek in August that build quality is one area in which consumer-oriented devices don't always live up to enterprise standards--a concern the 6430u should address. With an aluminum laminate lid, magnesium-alloy frame, and steel hinges assembled to meet the U.S. military's MIL-STD-810G standards, the device should handle bumps, drops, and exposure to relatively extreme temperatures.

Power users will appreciate the swappable batteries--not standard fare on all Ultrabooks. The 6430u's 13.3-inch screen, meanwhile, supports 1366 x 768-pixel resolution, and the computer's interior can house up to 8 GB of RAM, an SSD of up to 256 MB, and an Ivy Bridge i3, i5, or i7 processor. The features are rounded out by the same security options boasted by its tablet sibling--Dell Data Protection and fingerprint and smartcard readers--plus Intel's vPro. Like the Latitude 10, the 6430u will run Windows 8 Professional.

In an email, Gartner analyst Michael Gartenberg wrote that "the Dell offerings look compelling" for "legacy Windows customers looking for Windows 8-optimized PCs." He cautioned, however, that it's hard to judge the devices "without spending time with the final hardware and software."

Gartenberg also reiterated that the business market will be tough to crack, no matter how successfully Dell's new products execute. "x86-based tablet PCs have been around for a long time and [have] failed to attract customers or mainstream business users," he wrote. He cited the iPad's role as a primary motivator of BYOD policies, stating that "more businesses are supporting iPad for their users" and that as consumer forces influence business decisions, "appealing only to the IT department is a mistake." He said there are "certainly enough solutions for iPad" that make it viable for enterprise management and security needs.

Dell has not yet disclosed pricing details for the new products. Nevertheless, both should be available when Windows 8 ships at the end of October, so it will be clear soon enough whether Dell's enterprise-centric approach will help it to gain workplace market share.