50%
Tweet
The 3.5-inch GoFlex is the first commercially available external hard disk drive to deliver capacities of up to 3TB. 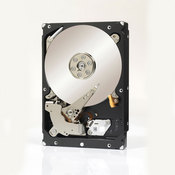 Seagate Barracuda XT 3 TB Hard Drive
Seagate broke the terabyte hard disc drive barrier Tuesday with the introduction of the first commercially available 1 terabyte per platter external hard drive. This breaks the previous 1 TB area density barrier, by creating the industry's highest area density of 625 gigabits per square inch and is intended to help meet the "explosive" worldwide demand for digital content storage in both the home and the office.

Seagate's GoFlex 3.5 inch HDD will be the first products to feature the hard drive with storage capacities up to 3 TB and an areal density of 625 gigabits per square inch. Seagate will also ship the technology with its flagship Barracuda desktop hard drive sometime this summer, which will be available in 3 TB, 2 TB, 1.5 TB, and 1 TB capacities.

The new drives will offer the highest storage capacity on the market and is expected to meet the storage capacity needs of individuals and the enterprise--with the ability to hold an estimated 120 high-definition movies, 1,500 video games, 40,000 songs and "countless" hours of music.

"Organizations of all sizes and consumers worldwide are amassing digital content at light speed, generating immense demand for storage of digital content of every imaginable kind," said Rocky Pimentel, Seagate executive vice president of worldwide sales and marketing, in a release. "We remain keenly focused on delivering the storage capacity, speed, and manageability our customers need to thrive in an increasingly digital world."

The GoFlex drives can be placed either vertically or horizontally to accommodate any desktop environment and are compatible with both Windows operating system and Mac computers. Each drive contains an NTFS driver for Mac, which allows the drive to store and access files from both Windows and Mac OS X computers without reformatting.

In March, Seagate introduced the 3 TB Barracuda XT internal hard drive. It came with software that makes it possible to override the technical limitations that prevent many PCs from running hard disk drives larger than 2 TB. In the coming months, Seagate plans to unveil the new Barracuda drives with the heightened storage capacity.

"We're coming up with a new Barracuda design that will leverage the new terabyte capacity," said David Burke, product marketing director at Seagate, in an interview. "It's going to be close in performance to the GoFlex and maybe up to 5% faster. It's going to push the envelope in terms of performance and being the fastest thing available."

Last June, Seagate released what it claimed to be the first 3 TB external hard drive at the time - the FreeAgent GoFlex Desk. Western Digital followed Seagate by announcing its own 3 TB internal hard disk drive.

Seagate and its competitors continuing increase in storage space for drives is emblematic of the growing need for storage in the enterprise and at home, as consumers and enterprises are increasing their storage demands.