SEARCH
A minimum of 3 characters are required to be typed in the search bar in order to perform a search.
Announcements
Alert
Got some free time? Grow your knowledge from the comfort of your computer for FREE!
Alert
Are you looking to stay on top of IT trends? Check out our FREE webinars and virtual events!
Alert
Planning for 2023? Be sure to check out our upcoming in-person events!
Report
How does your salary stack up? 2022 IT Salary Survey Results Revealed
PreviousNext
PC & Servers
3 MIN READ
Commentary

At Comic-Con, No Tintin Mania 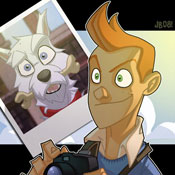 Hart runs down a list of comics-based movies in production, including the next X-Men saga, the noir cult favorite Watchmen, Will Eisner's revered Spirit, and so on. But he misses what is likely to be the biggest comics movie of all time, and one that involves neither caped superheroes nor grotesquely made-up arch-villains. I'm referring, of course, to Tintin.

The first full-length feature film about the intrepid boy reporter and his fluffy white sidekick Snowy has been in development for years and has the biggest of Big Hollywood Names behind it: Steven Speilberg is directing and Lord of the Rings helmsman Peter Jackson is producing. A trilogy is said to be in the works, with the first installment to appear next summer.

With its bias toward caped crusaders and cutting-edge weaponry, Comic-Con is not a hotbed of Tintin love, either: comics authority Luke Y. Thompson, writing on Deadline Hollywood Daily, doesn't mention Tintin in his convention preview.

While easy to understand, the relatively unexcited response ignores that fact that The Adventures of Tintin, created in the 1920s by Belgian artist Hergé, is almost certainly the biggest-selling and most beloved comic book (or "graphic novel," to use the phrase de jour) of all time. Tintin doesn't have magical powers, his escapades tend to happen in far-off pre-video-game times, and the special effects in the Spielberg film, while sure to be impressive and delightful, will not rival those of Iron Man and The Dark Knight for explosive power or violence.

But for readers like me, Tintin was an introduction to the world's more exotic locales and cultures. Tintin outwitted evildoers in Eastern Europe (King Ottokar's Sceptre), Shanghai between the wars (The Blue Lotus), and Tibet (Tintin in Tibet). He even made it to the former Belgian colony, the Congo, in a painfully racist depiction of Africa that is often dropped from later collections. Famous for his devotion to historic realism, Hergé created intricate, detailed worlds that contain more authentic life in one panel than a Frank Miller gorefest does in an entire series.

Don't get me wrong; I'm also a fan of Frank Miller, whose masterful Ronin is on the drawing boards for a 2009 or 2010 release. But for comics freaks of a certain age (and their lucky offspring, introduced to Tintin as soon as they can read), the real comic-book movie event will involve a European kid in knickers and an odd hairstyle.