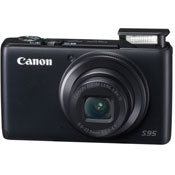 The PowerShot S95 and SD4500 IS are equipped for low-light photography, but the latter is Canon's first compact with the ability to record 1080p HD video. The other new cameras record at 720p. The third camera, the PowerShot SX13, is Canon's budget compact.

The S95 and SD4500 IS have 10-megapixel imaging sensors, but the former is a CCD device, while the latter is a CMOS sensor, which generally produces higher picture quality. Both cameras include Canon's HS System, which improves image quality by helping to reduce noise at the high ISO levels needed in low-light photography.

The S95, the predecessor to last year's S90, features Canon's in-camera HDR scene mode that's particularly useful in taking outdoor photos, where an image can have very dark tones and bright highlights. The mode enables the camera to take three sequential images with various exposures and then combine them into a single optimized image that becomes the final photo, according to Canon.

The S95 also sports a 3.8x optical zoom and an f/2.0 lens that opens up to 28mm wide. The camera also allows the more advanced shooter to switch to manual mode. The S95 is scheduled to be available in late August for an estimated price of $400.

The SD4500 IS captures 1080p video at 30 frames per second and also has a slow motion mode capable of capturing a subject at 240 frames per second. The camera has a 10x zoom and a handheld night scene mode for taking low-light photos without a tripod.

Finally, the SX130 is a budget compact that's successor to the SX120. The latest camera has a 3-inch LCD screen and a 12x optical zoom. Also set to be available in mid-August, the SX130 has an estimated price of $250.