Microsoft and Facebook are joining forces to construct the "MAREA" undersea cable, which will deliver high-speed connectivity across the Atlantic.

Microsoft and Facebook are partnering up to build a massive undersea cable across the Atlantic.

Dubbed "MAREA," from the Spanish word meaning "tide," the cable will span 6,600 kilometers (4,101 miles) and connect Virginia Beach, Va., with Bilbao, Spain. From there, it will extend to network hubs in Europe, Africa, the Middle East, and Asia.

The project is intended to meet a growing demand for fast, resilient connectivity for Facebook, Microsoft, and their customers. People and businesses alike expect to have instant access to information they need.

As the world continues to move towards a cloud-based future, Rey continued, Microsoft is working to build a global infrastructure so it can support reliable and low-latency connectivity for cloud services.

"This robust, global infrastructure will enable customers to more quickly and reliably store, manage, transmit and access their data in the Microsoft Cloud." MAREA will be the highest-capacity undersea cable to cross the Atlantic, with 8 fiber pairs and an initial estimated capacity of 160Tbps.

Microsoft and Facebook are building the cable in partnership with Telxius, Telefónica's telecommunications infrastructure company. Telxius, which has experience in subsea cables, will operate and manage the MAREA system.

MAREA is being developed with an "open" design so it can work with a variety of networking equipment. This methodology is good for customers, who benefit from lower costs, easier equipment upgrades, and faster growth in bandwidth rates, because the system will be able to "evolve at the pace of optical technology innovation."

Facebook aims to meet its goal of connecting people around the world. "By creating a vendor-agnostic design with Microsoft and Telxius, we can choose the hardware and software that best serves the system and ultimately increase the pace of innovation," wrote Najam Ahmad, vice president of network engineering at Facebook, in a statement.

Ahmad noted that Facebook hopes to do more projects like this in order to boost efficiency and collaboration. Facebook believes this is how most subsea cables will be constructed in the future, he said. 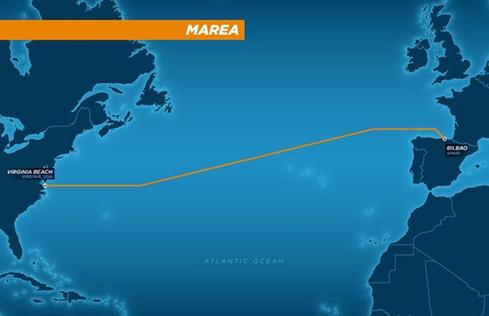 Rey also noted that MAREA will be built south of existing transatlantic cable systems in the New York/New Jersey region. This separate placement will ensure stronger and more reliable connections to customers around the world.

In May 2015, Microsoft announced a partnership with Hibernia and Aqua Comms for a cross-Atlantic project. Each company will connect one high-speed data cable in order to connect Microsoft's data center infrastructure in North America, Ireland, and the UK.

In 2012, Facebook invested in an underwater Internet cable dubbed the Asia Pacific Gateway to improve connectivity for people and businesses. The 10,000-kilometer (6,214-mile) cable would run directly from Malaysia to South Korea and Japan, with sections extending to different countries, reported the BBC.

With respect to their newest project, Microsoft reports both companies have met the requirements to go "Contract-in-Force" with their plans. Construction for the MAREA cable will begin in August 2016, and is expected finish in October 2017.

Kelly Sheridan is the Staff Editor at Dark Reading, where she focuses on cybersecurity news and analysis. She is a business technology journalist who previously reported for InformationWeek, where she covered Microsoft, and Insurance & Technology, where she covered financial ... View Full Bio
We welcome your comments on this topic on our social media channels, or [contact us directly] with questions about the site.
Comment  |
Email This  |
Print  |
RSS
More Insights
Webcasts
Bolstering Your Enterprise Cyber Risk Assessment
Disaster Recovery/Business Continuity in the New Normal
More Webcasts
White Papers
4 Key Elements of an ML-Powered NGFW: How Machine Learning is Disrupting Security
Best Practices Guide to Containers/ Kubernetes Security
More White Papers
Reports
Why You're Wrong About Operationalizing AI
Future Proofing Your Network for 5G
More Reports