Microsoft will show off Azure Service Fabric at its Build Conference next week. It will help developers build microservice-based applications.

Windows 10: Your PC Is Headed For The Cloud
(Click image for larger view and slideshow.)

Microsoft is paving the way for the day when containers will run under Windows Server, as well Linux. At its Build developer conference, which kicks off April 29 in San Francisco, the software giant will demonstrate how its new Azure Service Fabric can be used to build distributed, microservice-based applications.

There's no way developers can actually start using Service Fabric, yet. They will have to wait for the first preview editions of the next version of Windows Server, coming out later this year, with general availability coming sometime next year.

At the Build conference Microsoft will offer an SDK and developer preview of Service Fabric in order to start getting developers acquainted with how it can be used. Microsoft executives will discuss the next generation of applications and Service Fabric technology on the first day of Build, according to Mike Schutz, Microsoft's general manager of cloud platform marketing. 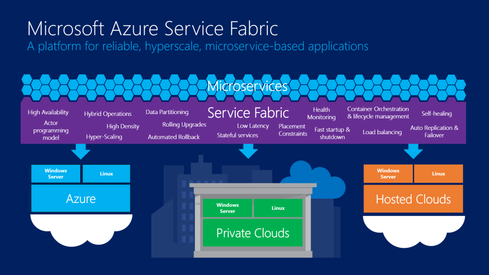 Service Fabric reflects Microsoft's own experience in delivering cloud services. It provides the Azure core infrastructure with its ability to scale such things as DocumentDB, Azure SQL Database, and Bing Cortana. It's also used behind Skype for Business, Event Hubs, and InTune. Cortana uses Service Fabric to scale up to 500 million evaluations per second, Russinovich wrote.

[Want to learn more about what Docker containers will offer? See Docker 1.6 Emerges As A Platform.]

Service Fabric has built-in intelligence on the infrastructure resources available for an application, and can overcome a server failure by starting new instances and scaling to more hosts. It's been designed with "self-healing behavior" that makes an application using Service Fabric "durable and highly available" in a large scale-out setting.

"We are now making this battle-hardened technology available for everyone to use -- not a version of what we use but the exact technology we use ourselves," emphasized Russinovich.

Service Fabric, according to Russinovich, will include:

All of this is good, from a Microsoft developer's point of view, but its real value probably lies in the future as Microsoft gets support for Docker containers into Windows Server, which will become generally available sometime in 2016. Many developers want to build their applications, not only as a set of microservices, but also as microservices isolated in separate but interconnected containers.

The software in a container can be worked on and updated without endangering the operation of other containers and a new service swapped for an old one more easily than in earlier application designs. Microsoft plans to add Windows Server Containers from running on bare metal hosts, and Hyper-V Containers for running inside virtual machines.

Microsoft containers, combined with Azure Service Fabric, would give Microsoft developers technologies equivalent to what's already found in the Linux community, and command much developer attention. Microsoft may still be playing catch-up when it gets there, but Windows developers will have a reason to stay in place and consider switching operating systems if Microsoft can deliver the goods.

Charles Babcock is an editor-at-large for InformationWeek and author of Management Strategies for the Cloud Revolution, a McGraw-Hill book. He is the former editor-in-chief of Digital News, former software editor of Computerworld and former technology editor of Interactive ... View Full Bio
We welcome your comments on this topic on our social media channels, or [contact us directly] with questions about the site.
Comment  |
Email This  |
Print  |
RSS
More Insights
Webcasts
Zero Trust for a Work-From Home World
Cybersecurity's Next Wave: What You Should Know
More Webcasts
White Papers
Why Add Security to Your Skill Set and How to Do It
Supercharge Incident Response with DDI Visibility
More White Papers
Reports
Accelerate Threat Resolutions with DNS
2021 Top Enterprise IT Trends - Network Computing
More Reports

Microsoft uses Service Fabric underneath its Azure SQL DB to support two million Azure SQL users with thousands of copies of the database system running at any one time. "We still get new features out to our customers quickly," through the way updates can be applied through Service Fabric, said Mike Shutz in our interview. Through Service Fabric, Azure handles any need to scale up or scale down during operations.
Reply  |  Post Message  |  Messages List  |  Start a Board
Editors' Choice
Hot Topics

11 Ways DevOps Is Evolving Lisa Morgan, Freelance Writer,  2/18/2021
White Papers
Why Add Security to Your Skill Set and How to Do It
How Secure Are Your Endpoints?
The Infoblox Q4 2020 Cyberthreat Intelligence Report
Improving Security by Moving Beyond VPN
Key Strategies for Managing New Risks in Cybersecurity