HPE and Cisco are joined by merged Dell EMC as big three contenders to supply cloud providers. Are white box manufacturers a threat?

In an unusual four-way tie, the market for cloud servers, switches and storage is being carved up equally by HPE, Dell EMC, Cisco and original design manufacturers, also known as white box manufacturers.

Previously, HPE and Cisco appeared to be locked in a close run race for the lead in the category of cloud hardware. Cloud infrastructure providers such as Microsoft Azure, Google Cloud Platform and Amazon Web Services along with the managed cloud services, such as Rackspace, Equinix and CDC, have been leading consumers of x86-based and other commodity hardware, offsetting to some degree a decline in purchasing by the consumer market.

Spending on cloud hardware for both public and private clouds totaled $70 billion in 2016, with 27% of that spending occurring in the fourth quarter, according to Synergy. "For years, HPE and Cisco have been in a closely contested fight for worldwide market share, but in Q4, they were joined by the recently merged Dell EMC," noted the Synergy announcement of its report.

For the first time, new data show that "Dell EMC, HPE and Cisco are essentially tied for leadership of the strategically important cloud infrastructure equipment market," with white box manufacturers in Taiwan making up a fourth and equal supply source.

White box producers include Quanta, Pegatron and Foxconn in Taiwan, with some manufacturing in China. They build servers and switches to the specifications and design of the buyer. Microsoft, Equinix, Facebook and other cloud suppliers have joined the Open Compute Project and use its standardized designs to provision their cloud data centers.

John Dinsdale, chief analyst at Synergy, said in the announcement that HPE has "a clear lead in the server segment and is a strong challenger in storage." Likewise, Cisco "is dominant in the networking segment and also has a growing server product line." Dell EMC ranks number two as a server provider "and has a clear lead in storage," Dindale said.

Microsoft also figures into Synergy's picture of cloud hardware revenues due to its strength in cloud server operating systems and virtualization software. IBM has "a strong position" due to a range of cloud technology products in servers and storage.

The current $70 billion spend to equip cloud infrastructures "is already huge, it is still relatively early days in the transition of enterprise workloads to the cloud," Dinsdale pointed out. "That means that success in the cloud infrastructure market is vitally important to IT vendors and they will be fighting long and hard to maximize their market shares," he said. 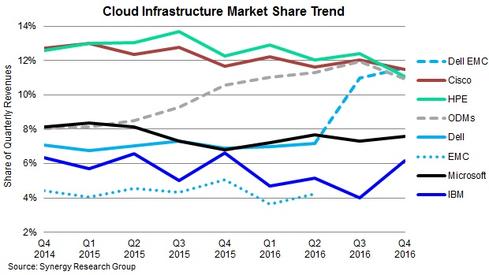 Dinsdale also pointed out the persistent role of the white box manufacturers. As the three primary vendors "slug it out with each other, original-design manufacturers continue to maintain their strong position, thanks to the hyperscale cloud providers increasingly using own-designed servers, storage and routers," he said in an email message.

It's possible that the white box manufacturers in aggregate will become the market leader if open source hardware designs become more widely accepted by cloud service providers. The existing white box suppliers may be joined by a new breed of ARM-chip based server providers, including Cavium, Applied Micro, QualComm and AMD if there proves to be a market for ARM-based processing among the cloud suppliers. ARM chips, which typically power mobile devices, are low power consumers for the amount of work they do.

In one example, Cavium has been selected by the European Mont-Blanc high performance computing project as the basis for its ARM server architecture. Cavium will partner with manufacturer Atos to produce servers to be used by the project. The project seeks to find a breakthrough technology for building an "exascale" computing platform at a lower than usual cost.

"The project takes a holistic approach, encompassing not just hardware, but also operating system and tools, and applications. The new platform will therefore be a key asset to all Mont-Blanc partners, to assess options for maximum compute efficiency" for an ARM-based high performance compute platform, said the announcement of the partnership on Jan. 16.

Charles Babcock is an editor-at-large for InformationWeek and author of Management Strategies for the Cloud Revolution, a McGraw-Hill book. He is the former editor-in-chief of Digital News, former software editor of Computerworld and former technology editor of Interactive ... View Full Bio
We welcome your comments on this topic on our social media channels, or [contact us directly] with questions about the site.
Comment  |
Email This  |
Print  |
RSS
More Insights
Webcasts
Protecting Your Enterprise's Intellectual Property
How Elite Analyst Teams are Transforming Security with Cyber Reconnaissance
More Webcasts
White Papers
A Technical Deep Dive on Software Exploits
2020 SANS Enterprise Cloud Incident Response Survey
More White Papers
Reports
How Data Breaches Affect the Enterprise (2020)
How IT Security Organizations are Attacking the Cybersecurity Problem
More Reports

Thanks for sharing the battle intensifies  to become a cloud hardware.it is so nice article .once again thanks for the post.
Reply  |  Post Message  |  Messages List  |  Start a Board
Editors' Choice
Hot Topics